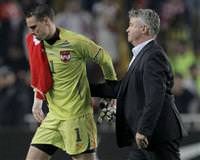 UEFA is probing incidents at Tuesdays Euro 2012 qualifier in Istanbul where Austrias goalkeeper was pelted with objects by Turkey fans.

Juergen Macho went down after being struck by the objects which appeared to be plastic sticks from flags waved by supporters as he took a goal kick amid a chorus of jeering and whistling late in the match.

Macho played on and completed the game which was won 2-0 by Turkey.

"We are looking at the incident to decide whether we need to open a disciplinary case," a UEFA spokesman told Reuters.

UEFA also responded to comments by Spain goalkeeper Iker Casillas who complained bitterly about the state of the pitch in Kaunas where the world champions beat Lithuania 3-1.

European soccer's governing body said it was up to the referee and the home association to decide whether the pitch was fit to play on.

"If the host association finds a match cannot take place, for example because the field is not fit for play or because of the weather, it must notify the visiting association and the referee before their departure from home and the UEFA administration at the same time," said UEFA in a statement.

"In this case the match must be played on another date as agreed by the host association and the visiting association, subject to the approval of the UEFA administration.

"In the specific case of Tuesday night's match the referee decided after assessing the situation the pitch was fit for the game to go ahead," read the statement.

Casillas described the pitch as "impossible to play on" and a "disaster".