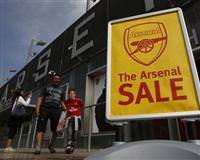 Arsenal is poised to become the fifth Premier League club to have an American owner after sports tycoon Stan Kroenke agreed a deal for a takeover that values the soccer club at 731 million pounds ($1.2 billion).

He now controls 63 percent of Arsenal and under Takeover Panel rules is compelled to make an offer for the remaining shares.

Russian steel magnate Alisher Usmanov is the other major shareholder, holding a 27 percent stake through his Red and White vehicle which declined to comment on what his plans were.

"Arsenal is a fantastic club with a special history and tradition and a wonderful manager in Arsene Wenger," Kroenke, who first made his fortune developing commercial and retail properties, said in a statement.

"We intend to build on this rich heritage and take the club to new success."

Arsenal, who are second in the Premier League behind Manchester United, have gone six years without a trophy since their FA Cup success in 2005.

The Gunners have 62 points from 31 league games and are seven points behind United with a game in hand and they are also still to host their rivals on May 1.

Fans have been frustrated as the 13-times English champions' spending on players has lagged behind rivals such as Chelsea and Manchester City and while it remains to be seen how much money would be in the transfer pot, Wenger welcomed the takeover.

"I have worked with Stan Kroenke at board meetings over the past couple of years and I believe he has the best interests of Arsenal at heart," the Frenchman, who has managed the club since 1996, said in a statement on the club website (www.arsenal.com).

"He understands the club's heritage and traditions and our ambition to run the club in a way which protects our long term future."

Chairman Peter Hill-Wood will remain in his position.

Bracewell-Smith, whose family had been involved in the club for more than 70 years, issued a statement in support of Kroenke.

"I am confident of Arsenal's continued success both on and off the pitch and believe that Stan Kroenke will continue to develop the club in a manner true to its heritage for the players and the fans," she said.

"We wish the club, the directors and the supporters every success in the future. At the end of the day, our family will always be gooners (Arsenal supporters)."