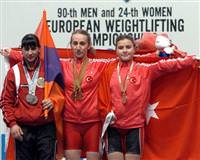 A strong wind from Turkey continued to blow yesterday as the European Weightlifting Championship went into day two in Kazan, the capital of the Tatarstan autonomous region tied to Russia. Aylin Daşdelen was able to repeat her success from last year, by winning three gold medals in the women's 53 kg category. Aylin first lifted 112 kilos in the clean and jerk and went on to try her luck in breaking the European record with an attempt at 122 kilos, however she was unsuccessful. Our 29 year old weightlifter went on to lift 90 kilos in snatch, reaching a total of 202 kilos in aggregate, securing three gold medals for Turkey yesterday.
Our other female contender in the same category, 19 year old Ayşegül Çoban also surpassed herself by winning a bronze medal for lifting 105 kilos in the clean and jerk. In aggregate, Çoban took fourth place. Second in aggregate was Armenia's Grigoryan and Germany's Rohde won the bronze medal.
In the men's 62 kg, Bünyamin Sezer managed to become the European championship with 131, 135 and 140 kilo lifts in snatch. Competing in the same weight category was Turkish weightlifter Hurşit Atak who placed fourth with 128 kilos. In the clean and jerk, Sezer lifted 153 kilos first and 158 in his second attempt, however was unable to pull through on his third with 161 kilos, thereby bringing Bünyamin the bronze. However with a 298 kilo aggregate, he still went on to win the gold medal. Hurşit Atak took silver for lifting 161 kilos in clean and jerk, and with an aggregate of 289 kilos, was the winner of the bronze medal. Romania's Victor Busi won silver for the aggregate.