United and Barcelona stay on course for a final repeat 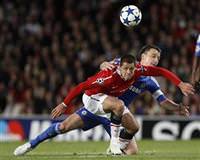 Manchester United and Barcelona progressed towards a possible meeting in the Champions League final for the second time in three seasons on Tuesday when they both reached the last four with the minimum of fuss.

United, 1-0 up from the first leg at Chelsea, beat their Premier League opponents 2-1 at Old Trafford with goals from Javier Hernandez and Park Ji-Sung whose winner came 21 seconds after Didier Drogba equalised on the night in the 77th minute.

Chelsea's misery was compounded as they finished with 10 men after Ramires was sent off 20 minutes from time while Fernando Torres, who has not scored since his 50 million pounds ($81.31 million) move from Liverpool in January, was substituted at halftime.

Barcelona, 5-1 up from the first leg, won 1-0 at Shakhtar Donetsk with World Player of the Year Lionel Messi scoring his 48th goal of the season.

Barcelona will almost certainly face Real Madrid in the semi-finals as their Spanish rivals take a 4-0 lead into their second leg at Tottenham Hotspur who they face on Wednesday.

United, who like Barca are on course for a treble this season, are set to play Schalke 04 who host holders Inter Milan with a commanding 5-2 lead from the first leg.

Barcelona beat United 2-0 in the 2009 final in Rome and, as if to suggest something is driving them together, both sides took the lead in the 43rd minute of Tuesday's games.

Hernandez crashed the ball home from close range for United while, at almost exactly the same time, Messi danced his way through the Shakhtar defence to score.

Another coincidence is that both teams were crowned champions of Europe for the first time at Wembley Stadium with United winning there in 1968 and Barcelona in 1992.

That was the last European Cup final held in London, with the showpiece match returning on May 28 to the new national stadium which reopened after rebuilding in 2007.