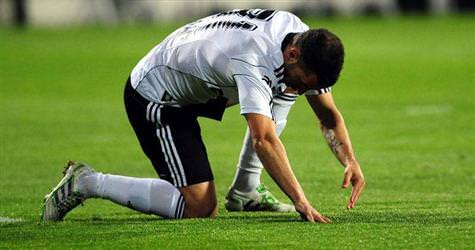 Overruling the field until they brought the score up to 2-0 Beşiktaş’s guard came down following a series of erroneous plays in the latter second half. Gençlerbirliği did not miss the opportunity to bring a point home to the capital by securing a 2-2 draw in Istanbul’s İnönü Stadium.

With Quaresma and Guti absent from last night's game against Gençlerbirliği, the question was, "What is Beşiktaş going to do?" The Black Eagles handled the first half well and started off the second half even stronger, without leaving any space for Gençlerbirliği. Well locked in, Gençlerbirliği was like a bird caught in a cage and was unable to fly even once up until the 55th minute. However, with the score up 2-0 in Beşiktaş's favor, it was the eagles that stopped flying entirely and Gençlerbirliği went ahead and took control of the ball. Managing to score two goals to bring the game to a draw, Gençlerbirliği now flies home to the capital with a point in the league from İnönü.
One of the factors that brought Gençlerbirliği to power was Beşiktaş's technical director Tayfur Havutçu's inexplicable player changes. The addition of Aurelio and Bobo in the game shook up Beşiktaş's fine tuning. Bobo writhed on the right, while Aurelio broke up the middle. From then on, Gençlerbirliği was the one to play the music.
Last night's 90 minutes summary of week 29's first game… The first one to test Gençlerbirliği's goalpost was Simao in the 4th minute, however Özkan's feet helped distance the ball. In the 27th minute, Beşiktaş's right-on organization changed the scoreboard. Ernst's excellent pass was met by İsmail on the right side of the penalty field who brought the ball to Simao who scored: 1-0. In the 32nd minute, Nihat shot a beautiful strike from the left diagonal; however Özkan's reflexes spoke, saving the ball. Beşiktaş closed out the first half with a one goal lead.
In the 52nd minute, defense player İbrahim Toraman took the stage. Nihat's center was met by a rising Toraman, who brought the fans to their feet and the score up once more: 2-0. In the 63rd minute, Gençlerbirliği responded with a free kick by Jedinak: 2-1. The capital team was revived by Yasin and Emre who did not let much time pass before they had secured a draw. Coming face to face with Rüştü, Mustafa Pektemek did not forgive and brought the score to 2-2. After that score Beşiktaş proceeded to take all risks possible. In the 79th minute, Ernst made an attempt, however Özkan was successful. In the 88th minute Yasin tried, but missed a chance to take the lead for Gençlerbirliği. Beşiktaş continued to sweat… With the 2-2 draw in İnönü, Gençlerbirliği came out the team on top last night.