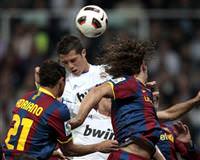 Barcelona took a giant stride towards a third straight La Liga title when they drew 1-1 at 10-man Real Madrid on Saturday to preserve their eight-point lead over their arch rivals at the top with six games left.

In a tense encounter at the Bernabeu, the first of four clashes between the teams in three competitions in 18 days, Lionel Messi scored from the spot in the 53rd minute after Raul Albiol was sent off for a foul on David Villa in the area.

Barca looked to be cruising towards a sixth consecutive victory in the "Clasico" under coach Pep Guardiola when Dani Alves felled Marcelo and the referee awarded another penalty, converted by Cristiano Ronaldo.

The equaliser lifted Real and their Germany midfielder Sami Khedira had a great chance to win the match in the final minute but shot straight at Victor Valdes.