F1 must do more to sell itself, says McLaren boss 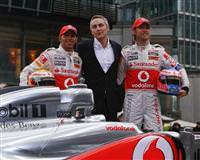 Formula One served up a thriller in China at the weekend but the lack of fans indicated the sport must do more to sell itself to new audiences, according to McLaren boss Martin Whitmarsh.

While few could fault the racing on display, with McLaren's Lewis Hamilton hunting down Red Bull's world champion Sebastian Vettel to end the German's winning streak, empty seats in the grandstands throughout the weekend caused concern.

The monumental Shanghai circuit has now hosted eight grands prix but, in a thriving economy with a vast potential audience, the race has yet to pull in the big crowds that might be expected.

"Formula One is used to going to venues that know and understand Formula One and want us," Whitmarsh told reporters.

"I'm not blaming anyone because we're all part of it, but we're not good at promoting our sport in new territories and I think you've got evidence of that not just in China."

The next race is at Turkey's Istanbul Park circuit on May 8. Now promoted by F1's commercial supremo Bernie Ecclestone, it is on the Asian side of the city away from the main tourist areas and has had pitiful attendances in the past.

"We've got to work harder at it," said Whitmarsh, who is also chairman of the Formula One Teams Association (FOTA) and has been involved in various initiatives to bring the sport closer to the fans.

"Fortunately we still have a fantastic worldwide television audience but we need to work harder at circuits that are in new territories to promote the sport."

"If you go to downtown Shanghai and look for all the promotions going on for this event, I suspect you would struggle to find very much," added Whitmarsh.

"I'm not a sports promoter, I'm just someone who works for a Formula One team but it strikes me that we've got to do much more to promote our sport, develop it, invest in its promotion than we do."

Hamilton said he was doing his bit.

"While the grandstands aren't as full as we would like perhaps, every time I arrive at the airport I've got fans standing there waiting," he said after winning.

"Their support is just incredible. They are there before you leave in the morning and when you come back, it's absolutely unbelievable."

Formula One has moved to a string of new arenas in recent years, with Abu Dhabi and South Korea the most recent and India joining the calendar this season. Next year will see the return of the United States with a new race in Austin, Texas, while Russia makes its debut with the Sochi circuit in 2014.

Other countries that have expressed an interest include South Africa and Mexico.

Whitmarsh said important lessons had to be learned before the sport made its return to the United States, a market it has repeatedly tried and failed to crack over the decades.

The last U.S. Grand Prix was at Indianapolis in 2007, also won by Hamilton for McLaren.

"The USA does not need Formula One, we need the USA, and I think if we just plonk ourselves down there and believe that America is going to reignite its enthusiasm for Formula One, I think we are wrong," he said.

"I think we've got to work harder than traditionally we've had to.

"I think we (FOTA) have got to engage better with the commercial rights holder to accept that we've got to do more than we've done in the past."