This one’s for my father! 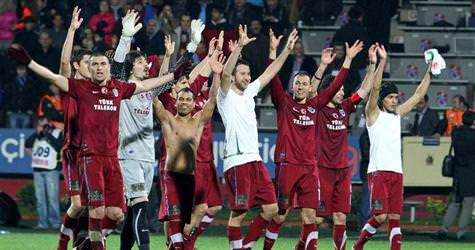 Known for ‘scoring one goal to get three points’, Trabzonspor managed to beat champions Bursaspor with Burak Yılmaz’s magnificent goal, ensuring they entered into the final fifth week of the Spor Toto Super League as leaders. Gifting last week’s goal to his mother, this time Burak ran straight to his father who was watching from the stands.

In the second half of the league, Trabzonspor's games have been heart-stopping for the fans in the stands and last night was no different. When considering the pressure put on by the proximity of the league championship their apprehension is understandable, however whether they can continue to go all the way with single goal wins and scores such as 1-0 or 2-1 is yet to be seen. Just five games remain for Trabzonspor to reach their championship aspirations. Current champions Bursaspor gave it all to secure a win. However it was Trabzonspor, with Burak Yılmaz's goal and the support from the stands that came out the victors last night.
The first ten minutes of the game started with a tempo. Each player that got the ball, headed straight towards their rival's goalpost, yet both teams struggled to secure positions. In the 13th minute, a wind of excitement blew over Avni Aker stadium. From the left wing, Jaja passed to Alanzinho who delivered the ball to Burak, however Bursaspor goalie Ivankov displayed his superior reflex skills, saving the shot from turning into a goal. After this close shot, the tempo dropped as ball losses increased, that is … up until the 24th minute. Volkan Şen's nice center was headed by Ozan İpek however the ball hit the goalpost and then fell in front of Batalla. The Argentinean went straight for the empty goalpost; but a sliding Giray saved the ball from going in at the line.
In the final minutes of the first half, the game seemed to continually stop. We saw the teams' doctors on the field more than the actual players. Just as we thought that the score into halftime would remain 0-0, Burak fancifully past ahead of İbrahim to send the ball to the far corner, securing a 1-0 lead into the break. Bursaspor started off the second half strong as Trabzonspor pulled back. When the visiting team persisted with attempts to get the ball to Miller, they lost sight of opportunities to score. Trabzonspor woke again in the 80th minute on. In the 88th an attempt by Umut was ineffective. One minute later, Colman's pass to Umut's strike was sent to a corner shot by Yavuz. Winning once again with a score by Burak, Trabzonspor starts the amazing race in the final five weeks as league leaders.

El Nino Burak!
Burak Yılmaz's score against Bursaspor was reminiscent of a "Torres-type" goal. Nicknamed "El Nino", last night's goal by Burak was reminiscent of former shots witnessed by Spanish forward Fernando Torres, who has yet to display his skills of late. Brought up in A.Madrid then transferred to Liverpool, Torres moved on to Chelsea for 60 million Euros in the season break. He has yet to score a goal in the past 12 matches played. Burak Yılmaz, however, appears to be carrying Trabzonspor all the way with back to back goals.