When the captain takes the helm… 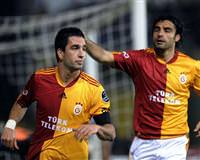 Galatasaray put an end to 58 days of longing for league points, with a three point win last night against Manisaspor. Arda Turan donned his favorite uniform and displayed a performance yet to be seen this season, while also marking his first goals.

Galatasaray has experienced crisis after crisis this summer. After a series of successive losses, Galatasaray went to Manisa to open a blank page last night. With Arda's game last night, he managed to anger those who hate him and please those who love him. For it was the first time Ardae seemed this intent and lively since his long suffered injury this season. As a team, in the first half of the game Galatasaray literally swept their rivals off of the field.
In the 14th minute, Culio's corner shot was met by Arda's header, which opened the curtain to the night, as Galatasaray's first goal. In the 17th minute, Sabri's free kick returned from the barrier. Sabri sent the rebound to Arda, who broke free of the goalie and scored into an empty goalpost, bringing the score up to 2-1 to Galatasaray's favor.


When in the 42nd minute, Stancu was unable to bypass the goalkeeper, Manisaspor began to harbor hope for the second half. In the 51st minute, Simpson's corner shot was met by Makakula, and then Isaac struck hard only for the ball to hit the side post and go out. In the 59th minute, Insua's pointless foul resulted in a shot for Yiğit Gökoğlan. Waiting by the goalpost, Dixon headed the ball over Insua, bringing the score difference down to a single goal. Just 85 seconds later, Culio responded with a third goal for Galatasaray, allowing them to breathe due to the 1-3 scoreboard.

MANİSA DID NOT GIVE UP
Manisaspor came into the second half well motivated and they refused to let up. Brought into the game in the 65th minute, Kahe's first touch of the ball was a header that went into the goalpost, bringing the score difference down to a single goal once again. The remainder of the game consisted of Galatasaray trying to secure their lead and three additional points in the league.

MANİSA'S LOYALTY
Arda exited the field in the 89th minute, and was long applauded by Galatasaray and his former team Manisaspor's fans alike. When he came to the side, Tugay Kerimoğlu brought a track suit and congratulated him with a kiss.