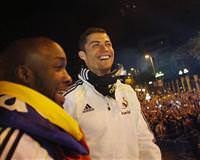 With penalties looming in a tense and occasionally brutal clash at a festive Mestalla stadium in Valencia, the Portuguese forward leaped to crash home a 103rd-minute header from Angel Di Maria's superb centre after regular time had ended in stalemate.

Their first silverware after two barren seasons also gives Real a lift ahead of their two-legged European Champions League semi-final against Barca on April 27 and May 3.

"Winning a trophy is always good," a weary-looking Mourinho, who was criticised by honorary Real president Alfredo Di Stefano after Saturday's 1-1 La Liga draw with Barca at the Bernabeu, said at a news conference.

"I try to do my work as well as possible and I am tired now but very pleased," added the 48-year-old.

"It gives me some tranquility, nothing more, and I will continue with my work."

Mourinho, who won the King's Cup in 1997 and 1998 as assistant to Barca coaches Bobby Robson and Louis Van Gaal, has now won cups in four different countries following triumphs in his native Portugal with Porto, in England with Chelsea and in Italy with Inter.

"In my opinion it was a great football match," he said. "I think we played well against a great team and beating a great team has more value."

In a festive atmosphere in the Mediterranean port city, one half of the 55,000-capacity stadium was decked out in the claret and blue of Barca and draped in Catalan flags, while the other was a sea of white flecked with the yellow and gold of Spain.

Mourinho opted not to include a striker in his starting 11, instead deploying an attacking trident of Cristiano Ronaldo, Mesut Ozil and Di Maria, who was sent off after receiving his second yellow card just before the end of extra time.

Barca, the 2009 Cup winners, had six players from Spain's World Cup-winning squad in their starting 11 and Real four but any memories of shared glory in South Africa seemed far from their minds in an attritional first half hour.

Real successfully closed down Barca's creative midfielders and pacy forwards and had much the better of the first half before Pepe crashed a header off the post in the 44th minute with goalkeeper Jose Manuel Pinto well beaten.

Barca had failed to muster a shot on target but the second period was a different story and they utterly dominated possession, Andres Iniesta and Pedro forcing fine saves from keeper and Spain team mate Iker Casillas.

However, even World Player of the Year Lionel Messi was unable to break the deadlock and Ronaldo almost put Real ahead when he sped on to Xabi Alonso's pass in the eighth minute of extra time but his arrowed drive whistled narrowly wide.

He made no mistake five minutes later and his powerful header sent the white half of the stadium into raptures and had them singing Mourinho's name long after Casillas had hoisted the trophy aloft and the Barca fans had trooped dejectedly into the warm Valencia night.

"It's a very important title we're going to enjoy it," Ronaldo said in a television interview.

"Mourinho has done a good job," he added of his compatriot. "He's helped us a lot. Barca played very well but as you know the team who scores wins."

Guardiola was philosophical in defeat and said he and his players now had to concentrate on recuperating for Saturday's La Liga game at home to Osasuna.

"First of all I want to congratulate Real Madrid," the former Barca and Spain midfielder told a news conference. "Life is like that. You can't always win."

Barca are the record King's Cup winners with 25, while Real now have 18.