The Black Eagles flap their wings to the finals 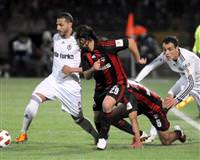 By drawing with Gaziantepspor by 2-2 last night, Beşiktaş has secured their spot in the Turkey Ziraat Cup finals for a 15th time. Should Beşiktaş be the victors of the May 11th final, the win will mark the fourth Turkey Cup for the team’s museum over the past six seasons.

Beşiktaş was under extreme pressure to secure a win last night, perceiving the cup as their last chance to get a ticket to European Cups. Beşiktaş had saved all of their key players including Quaresma from playing in league games so they could come out to fight last night. Aware of Beşiktaş's apprehension, Tolunay Kafkas sent Gaziantepspor out on the field with an 'offensive, offensive, offensive' philosophy. Despite having lost the first leg of the semifinals by 3-0 to Beşiktaş and despite coming out of a recent game against Fenerbahçe with heavy wounds, last night's hosts Gaziantepspor revealed their belief they could make the finals and within the first 5th minute of the game had taken the lead. Kafkas' effective attacks from the wings and surprise players racing to the goalpost, left Beşiktaş in trouble for the first 30 minutes.
After a series of strikes that didn't make it in, and a clear penalty referee Kuddusi Müftüoğlu didn't call, Serdar Kurtuluş gifted Beşiktaş with a penalty shot, which managed to quickly put out Gaziantepspor's fire. The administration was able to breathe again, and continue to carry on their hope to Kayseri as well as to obtain a visa for Europe, and the remainder of the evening was an enjoyable night of soccer against Beşiktaş and Gaziantepspor. The following are just some of the memorable highlights…
In the fifth minute, Quaresma lost a ball to Sosa who sent it straight towards the back post, which passed straight by Toraman and Olcan, bringing Gaziantepspor up by 1-0. The goal was like doping for Gaziantepspor, and a shock wave for Beşiktaş. In the 14th, Popovemade it to the penalty field with a pass by Cenk Tosun. However he wasn't able to maneuver well within and lost the chance to score. In the 24th, Olcay hit a header to the post once again, however the ball went out. Right after, Müftüoğlu decided to overlook Yalçın being pushed around by Almeida inside the penalty field and in the same position, Cenk's header did not make it into the goalpost. A swamped Beşiktaş was pulled out of the dregs by Serdar Kurtuluş, in the 33rd minute he interfered with his hand in the penalty field which resulted in a penalty shot, which Simao sent straight into the left of the post bringing the score up to 1-1.
A RESERVATION FOR THE FINALS
Gaziantepspor went into the second half with a number of unconscious plays and Beşiktaş went ahead and bought their ticket early. In the 49th minute, a ball won over by İsmail brought on a counter attack, which resulted in a goal by Almeida and an assist by Quaresma: 1-2. Beşiktaş was relieved following their second goal last night, and allowed an unexpected shoot by Olcan in the 69th minute which brought the score up to a 2-2 draw. In the remaining minutes of the game, Gaziantepspor tried to gain some prestige with their controlled playing, however Beşiktaş didn't give them a chance. Instead they went ahead and made their reservation for the May 11th Turkey Cup finals to be played in Kayseri.
.