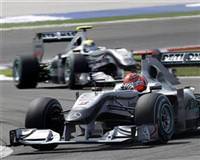 The Turkish Formula One Grand Prix faces the axe next year due to a disagreement with Bernie Ecclestone over payments for the race, the head of the Istanbul Chamber of Commerce said Friday.

There was no official statement but the Chamber of Commerce confirmed the comments separately to Reuters. Ecclestone's office was closed for the Easter holiday.

Yalcintas was quoted as saying the government had rejected a bid by Ecclestone to double the payment to stage the race to $26 million from $13 million.

"Because it found this figure very high it looks like it (finance ministry) will not make the payment. That is the reason the race is not happening," he said.

"Formula One says goodbye to Istanbul," said a headline in a Turkish newspaper.

` said last May that Turkey could expect to stay on the F1 calendar long-term despite attracting poor crowds at the circuit near Istanbul's second airport on the Asian side of the Bosphorus strait.

In 2009, a mere 36,000 three-day passes were sold -- a smaller turnout than at some of the pre-season tests in Spain -- and last year some of the stands were entirely empty.

The current contract runs out after this year's grand prix on May 8.

The undulating anti-clockwise track is popular with drivers, who have compared it to Spa's challenging layout with the left-handed triple apex turn eight a real test when taken at around 250kph.

Turkey's absence from the calendar will make it easier for Ecclestone to slot in the planned return to the United States next year, with a new track in Austin, Texas, pencilled in for a likely back-to-back with Canada.

This season was due to have a record 20 races, before the Bahrain season-opener was cancelled due to unrest in the country, and some would have had to be shed to make way for Austin and Russia's Sochi circuit from 2014.

Turkey's slot on the calendar has varied since the race's debut in 2005, with the grand prix moving from late August to June and early May. Last year it was the race immediately before Canada.