El Clasico part three has Barca on rare back foot 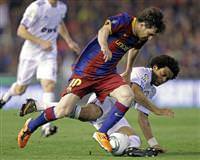 Barcelona hold an eight point lead over Real Madrid in La Liga but following a cup final loss to their rivals it is Pep Guardiola's side who seem to be feeling the pressure before Wednesday's Champions League clash.

A normally restrained Guardiola lashed out at his Real counterpart Jose Mourinho in the run up to the semi-final first leg, saying he would not be drawn into the colourful Portuguese's game of "constant insinuation."

It is also a year since Mourinho masterminded Inter Milan's elimination of favourites Barca at the same stage and the threat of another semi-final exit at his hands looms large over the Catalans for the third of four "Clasicos" in 18 days.

Cristiano Ronaldo's extra-time winner in the King's Cup final last week has given Mourinho's side a perfect boost and dented Barca's aura of invincibility.

Barcelona's cause has also not been helped by influential midfielder Andres Iniesta missing the clash at the Bernabeu through injury.

Nine-times winners Real though will be without midfielder Sami Khedira while Portuguese defender Ricardo Carvalho is suspended.

The second leg comes next Tuesday at the Nou Camp with the winners of the tie playing Manchester United or Schalke 04 in the final at London's Wembley stadium on May 28.