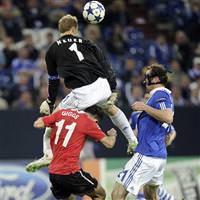 It is not often a manager feels able to rest key players for the second leg of a Champions League semi-final but so dominant were Manchester United against Schalke 04 that Alex Ferguson is planning just that.

With United imperious at Old Trafford this season, Tuesday's 2-0 win in the Gelsenkirchen first leg virtually secured their passage to the Wembley final on May 28 and gives Ferguson the unlikely option of rotating his team for two huge Premier League matches against Arsenal and Chelsea.

Ryan Giggs got the first goal, becoming the oldest scorer in the Champions League at 37 years and 148 days, with Wayne Rooney adding the second as United finally found a way past outstanding goalkeeper Manuel Neuer.

"You'd think at 37 he'd show signs of waning but I see no evidence of that," Ferguson said in the wake of Giggs' superb display as an attacking central midfielder.

"We look after him in terms of rest before games -- he won't play on Sunday (against Arsenal), but he'll play next Wednesday (in the second leg).

"I've got good options because Nani could have played, but (Antonio) Valencia's form showed why he is playing. We've got (Paul) Scholes and Anderson. We've got selection problems now, but that's what we want. We've got important games coming up.

"The way I'm going to look at it is that we want to get Sunday's game over and get a positive result because that is a very important game for us now.

"Depending on the result on Sunday I could make two or three changes (for the second leg) because we have Chelsea the following Sunday.

"It is a seven-day period which is crucial to the club but it is the kind of games the players are relishing. I think we are coming to a peak."

United are six points clear of Chelsea and nine ahead of Arsenal with four games remaining and could wrap up a record 19th league title with two games to spare.

That would put Ferguson in the luxurious position of being able rest his main men ahead of a Champions League final meeting with either Barcelona or Real Madrid, who meet in their first leg on Wednesday.

While neither of the Spanish sides will arrive at Wembley fearing United, they certainly would have taken notice at the verve and confidence they showed on Tuesday.

From the start they tore forward and nobody could have complained if they were three-up at halftime against a team who had previously won all their home games in the competition.

Ferguson, who enjoyed a similarly one-sided semi against Borussia Dortmund in 1997 only to somehow lose to the eventual champions, must have been getting a little nervous before Giggs broke the deadlock after 67 minutes.

Rooney's second two minutes later allowed United to ease off the gas but even then Schalke failed to trouble them.

The victory completed a remarkable campaign where the English side did not concede a single away goal in the competition -- the first team to do so -- yet it was probably the easiest night Edwin van der Sar has experienced all season.

"Our concentration, the intensity of our play and the speed of our passing were all excellent," Ferguson said.

"There is a different tempo at times. Over the last two or three years we have a way of playing in Europe away from home, we seem to be better than anywhere else."