Barca in final after seeing off arch rivals Real Madrid 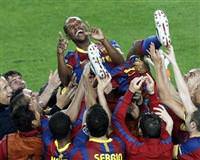 Barcelona's slick football at a rain-swept Nou Camp had Real Madrid chasing shadows for long periods again as the Catalans reached the Champions League final after a 1-1 draw sent the 2009 winners through 3-1 on aggregate.

Barca, in the final for the second time in three years, built on their lead from an ill-tempered first leg in Madrid when Pedro rifled in after 54 minutes.

Marcelo gave Real some hope with an equaliser 10 minutes later but their challenge petered out against the three-times European champions.

"There has been a great deal of effort behind this, a team that returned from the World Cup almost without having a break," Barca coach Pep Guardiola told Spanish television referring to the players who were world champions with Spain last year.

"Just let us enjoy this moment," he added, when asked about the controversy of recent weeks.

Bad blood had boiled up between the Spanish giants around four meetings in three competitions in 18 days and the final game of the series was again marred by diving.

Barca's success was payback for last month's King's Cup final defeat, as well as giving them a measure of revenge over Real coach Jose Mourinho.

The Portuguese, who was absent from the bench after being sent to the stands in last week's first leg, knocked the Catalan club out at the same stage last season with Inter Milan before leading the Italian club to victory in the final.

Real's players spent long periods chasing the ball as the Barca players sent it fizzing across the slick surface and they would have been out of sight by halftime if not for a slew of brilliant saves from goalkeeper Iker Casillas.

The Spanish World Cup-winner was finally beaten when Pedro raced on to Andres Iniesta's through ball and slotted into the corner.

Real got their first goal of the tie when fullback Marcelo followed up to score after Angel Di Maria struck the post but there was no way back for the nine-times winners.

While there was no repeat of the ugly scenes that marred last week's ill-tempered first leg, referee Frank De Bleeckere brandished six yellow cards -- five to Real players -- in another tetchy contest.

A massive thunderstorm had broken over the stadium a couple of hours before kickoff, drenching the huge arena.

The adverse weather conditions did nothing to dampen the spirits of the Barca faithful, who were in fine voice at the packed, nearly 100,000-capacity arena.

World Player of the Year Lionel Messi, who scored both goals in the first leg and is the competition's top scorer with 11, was a near-constant threat to the Real goal in the first half and was twice denied by superb Casillas saves.

The Argentina forward released striker David Villa into space in the 34th minute but Casillas was equal to his Spain team mate's curling shot.

As the match wore on, Mourinho's assistant, Aitor Karanka, and the Real players appeared powerless in the face of the relentless Barca tackling and possession and they managed just one shot on target to Barca's six.

"We have to lift our heads up and be proud," Real captain Casillas said in an interview with Spanish television as the Barca players celebrated wildly on the pitch.

"Anything we say now could be used against us," he added, referring to the controversy that led to the clubs filing complaints about each other with UEFA.

European soccer's governing body opened its own probe into the pair and is due to rule on Friday.

A subdued Karanka, a former Real player, told a news conference Mourinho had been right to say after the first leg that they were an impossible mission.

"There is nothing more to be said," he said, adding that Mourinho had spoken with the team and congratulated them for their efforts.

The biggest cheer of the night came when Guardiola replaced captain Carles Puyol with Eric Abidal in the closing stages.

The France fullback had surgery on a liver tumour in March and was a surprise inclusion in the squad.

The roars that greeted his entrance in the stadium may have drifted as far as the city centre, where thousands of Barca fans were celebrating the victory.

English Premier League club Manchester United will defend a 2-0 lead over Schalke 04 when they host the Bundesliga side in Wednesday's other semi. The final is at London's Wembley stadium on May 28 where Barca won their first European title in 1992.