Manchester United cruise past Schalke to set up Barca final 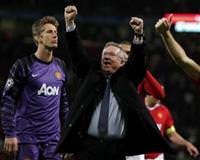 Manchester United will face Barcelona in a mouthwatering Champions League final later this month after they fielded a second-string side and still handed Schalke 04 a 4-1 thrashing on Wednesday.

United reached their third European Cup final in four seasons thanks to a 6-1 aggregate demolition of the Germans with two second-half goals from Anderson after Antonio Valencia and Darron Gibson had already put the tie out of reach.

Holding a 2-0 first-leg lead, United made nine changes for the match at Old Trafford to rest players for Sunday's Premier League game with Chelsea and the deputies notched the highest aggregate win ever seen at this stage of the competition.

United manager Alex Ferguson said he expected a "fantastic final" against Barca on May 28 at Wembley where the two teams will be trying to lift their fourth European Cup at the stadium where they each won the trophy for the first time.

"This is the best competition in the world, all the best teams are there. To get to the final is an achievement itself, but to win it is the ultimate," Ferguson told Sky Sports.

Schalke, outclassed for long periods, did get a consolation goal through Jose Manuel Jurado after 35 minutes but the contest felt more like an exhibition match with the German side's coach Ralf Rangnick admitting they were out of their depth.

United's comfortable first-leg lead enabled Ferguson to give the likes of first-leg scorers Wayne Rooney and Ryan Giggs the night off as a group of players other clubs would be happy to have in their first team enjoyed the limelight.

"I think you have to trust them sometimes," Ferguson, who has now led United to four Champions League finals, said of his squad players. "It was not an easy decision to make, one I wrestled with for a few days."

The home crowd began chanting "We're going to Wem-ber-ley" midway through the first half when Gibson's inch-perfect long pass found Valencia who steered the ball past keeper Manuel Neuer and into the bottom left corner after 26 minutes.

The goal seemed to crush any lingering hope for the visitors and five minutes later they failed to deal with another United surge and only got the ball as far as Gibson who cracked a shot that slipped through the usually reliable Neuer's hands.

Before the hosts could get too comfortable, though, they lost concentration when Chris Smalling gave a soft ball away in his own half allowing Schalke to mount a rare counter-attack that ended with Jurado's strike high into the net in the 35th.

The Schalke fans celebrated as if they were in the lead, lighting red flares high in the stands behind the goal, but the celebrations turned ugly when some supporters clashed with stewards before others unfurled a huge "Ultras" banner.

Neuer, Schalke's first-leg hero, failed to live up to last week's performance where Ferguson hailed his efforts as the best he had encountered from a keeper in a European match against United, and could have done better with United's third.

Anderson picked up a loose ball and shot past him in the 72nd before the midfielder added his second four minutes later when he was set up by the unselfish Dimitar Berbatov, who may not have scored but so often pulled the strings.

Anderson could have had a hat-trick but Neuer had pulled off an excellent save early in the second half, leaping high to the left to deny the Brazilian with an out-stretched hand.

The mood became even more like a testimonial as the Old Trafford faithful belted out songs about players long retired, while the current crop passed the ball around between them as easily as they might do on the training pitch.

Apart from one chance for Jefferson Farfan and Jurado's goal, Schalke never threatened but will take some comfort from the fact they still looked more convincing than last week.

"We have to admit we possibly could have gone out in earlier rounds... but we came to our level this evening," Schalke coach Rangnick told a news conference.

"The quality of the (United) players certainly stands out. Berbatov, Anderson and (the) two central defenders -- most Bundesliga sides would be happy to have that sort of quality in their teams."

Watched by the resting first-choice players, United set up a repeat of the 2009 final, when Barca beat them 2-0 in Rome.

Ferguson will demand a better performance this time and was encouraged by the fact that, unlike in two of their previous finals, his players were all fit. "We've got everyone available this time and that does make a difference," he said.

Three-times winners United won their first European Cup at Wembley in 1968 as did Barcelona in 1992.