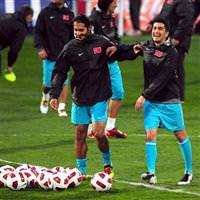 Having signed Mesut Özil on at the start of the season, Real Madrid is now getting ready to triple the number of Turkish players on the team. Nuri on Monday and Hamit next week may join the ranks of Real Madrid.

It appears Turkish players will be playing an important role in Real Madrid's plans for the upcoming years. After shining his crampons in the 2010 World Cup in South Africa 2010, Mesut Özil has fast become an indispensable part of Real Madrid and one of the most consistent players to come out to Bernabau. It appears he has also led the way for both Turkish National team contenders Nuri Şahin and Hamit Altıntop.
SABAH has acquired exclusive details from our two expat players' manager Reza Fazeli as they prepare to sign on to Real Madrid in the days to come. For Nuri, the Iranian manager shares, "He will announce where he will be playing next year at a press conference to be held on Monday at Borissia Dortmund's club building. I believe Nuri has made the best decision for his future." As for Hamit, whose name has also been added to both Beşiktaş and Fenerbahçe's transfer lists, Fazeli states, "Just like Nuri, Hamit will also be announcing his decision within the week during a press conference. I believe they will be successful together." According to Fazeli, this recent development has hit the headlines of AS, the sports newspaper which is known for their affiliation with Real. "Having played against Inter for the 2010 Champions League finals, Mourinho is a fan of Hamit for his strength in the middle field, his creativity and resistance. Hamit may not be a star transfer for Madrid, but he is the exact player that Mourinho wants."