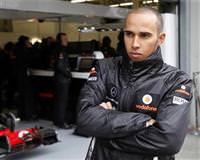 The 2008 world champion told Reuters ahead of Sunday's Turkish Grand Prix how watching the great German on television as a teenager had taught him the importance of holding his nerve.

In Shanghai, with the McLaren mechanics swarming around his car and racing against time to fix a fuel problem and get the car out to the starting grid with seconds to spare, Hamilton stayed focussed.

"It was good experience for myself as well to see how I was able to maintain my nerves and remain calm," said the 26-year-old, who won in Turkey last year after his Red Bull rivals had collided while leading.

"I remember growing up watching Schumacher in grands prix -- there was a race at the A1-Ring (the last Austrian Grand Prix in 2003) where his car caught fire in a pit stop.

"You could see his head just didn't move, he stayed calm. And that definitely helps the guys around you," said Hamilton of that incident, where the German's Ferrari suffered a brief flare-up while refuelling.

"I just think from things you've learned from watching TV over the years, you try to apply that to your mentality and the way you approach things.

Hamilton joked in Shanghai after the race that he would have to devise some new routines for his mechanics and engineers to keep their hearts racing as they had delivered some of their best ever pitstops that Sunday.

He smiled when asked what he was planning now.

"Maybe before the race I'll say my pedals aren't there or they aren't working or something like that, make them panic and then see if it works again," he said.

Joking apart, Hamilton was cautious about his prospects for the weekend in taking on the Red Bulls of world champion Sebastian Vettel and Mark Webber.

McLaren were gifted a one-two by them last year but they cannot hope for lightning to strike twice -- even though Hamilton said with a chuckle that "you never know what to expect with Sebastian, I guess."

He was speaking before Vettel crashed his car in a wet first practice. The German was unhurt.

Hamilton and team mate Jenson Button, the 2009 world champion, must also make sure they do not put each other out of the running either.

"We have to be faster than them and outpace them, which I'm not confident is going to happen," said Hamilton. "I have confidence in terms of my driving ability. I have no worries about that.

"We're team mates, we want to finish as high up as we can for the team, and we have no problems racing together," he added.

"We proved that in the last race, and we proved here last year. We're fair fighters, but of course aggressive in hopefully the right ways."