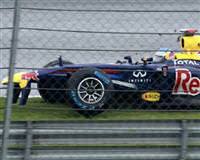 Formula One world champion Sebastian Vettel gave his mechanics plenty of extra work after crashing heavily in a wet first free practice for the Turkish Grand Prix on Friday.

The 23-year-old German, who has been on pole position at all three races so far this season, spun on a slippery track at the exit of the challenging triple apex turn eight and smashed front first into the barriers.

The session was red flagged with 27 minutes remaining, with marshals clearing mud off the track while the battered Red Bull was hoisted onto a flatbed truck and brought back to the pitlane.

"There was some water on the exit. There was nothing I could do," the championship leader, whose Australian team mate Mark Webber ended the morning 11th quickest, said over the team radio after his car skidded down the barriers to a halt.

Ferrari's Fernando Alonso was fastest in a session full of spins and spray with a best lap of one minute 38.670 seconds, although the times were almost meaningless at a cold and gusty Istanbul Park circuit.

Spain's double world champion was followed on the timesheets by the Mercedes pairing of Nico Rosberg, 1.402 slower, and Michael Schumacher ahead of Renault's Nick Heidfeld and Russian Vitaly Petrov.

McLaren propped up the rear, with last year's Turkish GP winner Lewis Hamilton 24th and failing to set a timed lap while team mate Jenson Button did just four as the team opted to concentrate on practising their starts.

When 2008 world champion Hamilton did go out late in the session, the Briton then suffered a sticking clutch and ground to a halt with mechanics sprinting to help.

A little piece of history was made at the slower end of the Istanbul pitlane, with India having two Formula One drivers setting a timed lap together for the first time at a grand prix weekend.

Karun Chandhok, the Team Lotus reserve, was given time in the car instead of Finland's Heikki Kovalainen while HRT's regular racer Narain Karthikeyan was also out on track.

Chandhok, who made his race debut with HRT last year before Karthikeyan made his comeback this season, had taken part only briefly in the first practice in Australia in March when he was first out of the pitlane and promptly crashed.

Karthikeyan did not take part in that practice session due to problems with his car.