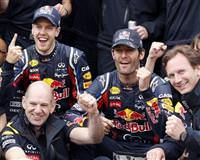 The 23-year-old German led from pole position, his fifth in a row dating back to last year, to take his third win in four races this year and stretch his lead over McLaren's Lewis Hamilton to 34 points.
Vettel now has an impressive 93 points out of a possible 100 with Hamilton, fourth on Sunday afternoon, on 59 and Mark Webber with 55.
Last year a dark and heavy cloud hung over the team after Vettel and Australian Webber, who finished second on Sunday, collided while fighting for the lead in the closing laps and blew a surefire one-two finish.
This year, with Vettel taking the chequered flag untroubled and 8.8 seconds clear of Webber on a sunny afternoon, Red Bull were all smiles as they lined up for their victory photograph outside the motorhome.
"It certainly exorcises the demons from last year," said a relieved team principal Christian Horner.
"We have forgotten Turkey 2010. It was a perfect race and the whole team performed wonderfully, no strategic mistakes," added Helmut Marko, advisor to Red Bull's billionaire owner Dietrich Mateschitz.

Vettel had crashed his car heavily in Friday's first practice, giving his mechanics plenty of extra work, but he felt he had atoned for that in a race with little incident but plenty of overtaking.

"It meant some extra hours for them, which I am sorry for, but I think yesterday and today makes up for it," he said.
Twelve months on, the championship leader was in no danger from Webber, who lost ground at the start and faced a big challenge to get back to second and then stay ahead of Fernando Alonso's resurgent Ferrari.
"The start wasn't that easy," said Webber. "The fight with Fernando in the middle of the race was a little bit unexpected, he drove fantastic today and it was a good fight...in the end I had a fresher set of tyres from qualifying and that was it really.
"But congratulations to Seb, another victory. He's on a roll obviously." Spaniard Alonso might have hoped for second place but third was still his team's first podium finish since last November in Brazil.
"We are in the right direction but this is only the first step," he said.
Vettel's 13th career win, and sixth from his last eight starts, was Red Bull's first Turkish success despite starting the previous two Istanbul races on pole.
"You beauty, Seb," shouted team boss Christian Horner as his driver took the chequered flag and whooped in delight from the cockpit.
The German also kept up a Turkish tradition, with the winner in Istanbul coming from the front row on all seven grands prix held here to date, in what could be the last race if local organisers fail to do a deal with F1 supremo Bernie Ecclestone.

Hamilton, winner of the previous grand prix in China, lost precious seconds at a slow second pitstop and said it had been "not one of my best races." Germany's Nico Rosberg was fifth for Mercedes with Britain's Jenson Button sixth after some stirring early duels with Hamilton. The 2009 champion was the only driver in the top six to do three stops rather than four.
The Renaults of Nick Heidfeld and Vitaly Petrov were seventh and eighth while Sebastien Buemi was ninth for Toro Rosso.
Japan's Kamui Kobayashi, starting from the back of the grid after failing to set a time in qualifying, snatched the final point for Sauber.
Mercedes had a disappointing afternoon after seeming to have made a big step up in qualifying. Seven-times champion Michael Schumacher collided with Petrov and finished 12th and last of the unlapped drivers.
"It was mostly my mistake -- suddenly we got together and I lost my front wing," said the German. "There was lots of fighting and lots of action, but all for nothing."