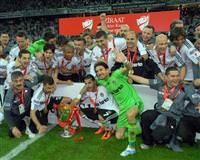 Beşiktaş toppled Istanbul Büyükşehir Belediyespor with penalties last night, to become the victors of the Ziraat Turkey Cup. Beşiktaş, which has taken the cup home four times in six years, has also put a ticket to the UEFA Europa League in their pocket.

Turkey had long missed witnessing such an exciting final. In a game that was enjoyable from start to finish, one could say that both teams were well deserving of the title. For, Beşiktaş however, this was their last shot at getting a chance to play in Europe next season. The players reminded themselves of this fact from time to time and especially when they fell behind. Istanbul Büyükşehir Belediyespor on the other hand had support from the stands and did not crumble in front of the constellation of stars which now constitutes Beşiktaş. We congratulate Istanbul Büyükşehir Belediyespor at least as much as Beşiktaş, this season's Turkey cup winners.
Beşiktaş beat Büyükşehir Belediyespor 4-3 on penalties to win the Turkish Cup final on Wednesday and secure a place in next season's Europa League.
The final, played in the central Turkish city of Kayseri, had finished 2-2 in normal time. Beşiktaş converted four penalties and two Büyükşehir players missed, firing their spot-kicks against the crossbar.
Winger Ricardo Quaresma had put Beşiktaş ahead in the 33rd minute, taking the ball on his chest and turning to shoot past goalkeeper Kenan Hasagic.
Striker Ibrahim Akin, a former Beşiktaş player, equalized from the penalty spot early in the second half after Mehmet Aurelio brought down Iskender Alin in the area.
The Istanbul municipality side went ahead in the 68th minute through a Gökhan Unal goal, but 10 minutes later Tomas Sivok headed in an equalizer from a Manuel Fernandes free kick to send the game to extra time.
Beşiktaş are sixth in the Turkish first division, 29 points adrift of leaders Fenerbahçe. Büyükşehir are ninth, six points behind Beşiktaş.
HAVUTÇU: NO CUP WOULD NOT DO
BEŞİKTAŞ's Technical Director Tayfur Havutçu was quite pleased following last night's game. "It was an unforgettable final," states the young trainer. "I want to congratulate all of my players. Penalty shots are somewhat dependent on luck. The cup was one of our absolute musts. It is a privilege and I am grateful to receive my first cup as a technical director. "