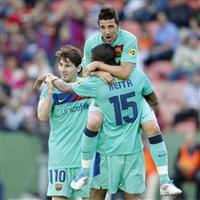 Amidst Barcelona's league title celebrations on Wednesday night, coach Pep Guardiola was already switching his focus towards how to maintain the side's remarkable winning momentum.

Barca wrapped up their third consecutive league crown with two games still to play after an anxious 1-1 draw at Levante, making it nine trophies in three years since Guardiola took the helm at the Catalan club. The 40-year-old coach shed tears on the pitch after the final whistle and kept repeating that it had been a particularly hard championship to win. "The main difficulty this year was that it came after the World Cup and we didn't know how the players would react," Guardiola told reporters. Eight of his squad helped Spain win the World Cup in South Africa last summer. "Experience said we would fall," he continued, reminding everyone they needed to set a club record 99 points to win the title last season. "But they kept it going. We proved they had the desire to keep winning and improving. They have taught us a lesson
Winning five leagues in seven years is something exceptional. "These players are unique and the club's job will be to find fitting replacements as they keep getting older. "Some areas have not worked so well and we need to strengthen in some areas. There are things we can improve." One area where Barca have found themselves short has been in defence where injuries to Carles Puyol, Adriano Correia, Maxwell and the surgery Eric Abidal had on a liver tumour have disrupted the last couple of months. Real Madrid's challenge under serial Barca-baiter Jose Mourinho pushed them to the limits, especially during the acrimonious four-match 'Clasico series', and their arch-rivals beat them 1-0 to win the King's Cup final last month. Real have already started their strengthening programme for next season landing Turkish playmaker Nuri Sahin from Borussia Dortmund on Monday. They have also been linked in the local media with moves for Espanyol striker Jose Callejon and Bayern Munich midfielder Hamit Altintop. Barca captain Carles Puyol preferred to focus his attentions on the Champions League final against Manchester United on May 28, and the chance to win a third European Cup in five years. "Now is the time to celebrate because the league is an important title," the Spanish international told the club website (www.fcbarcelona.com). "Afterwards we can rest and prepare for the final at Wembley."
Last Update: May 13, 2011 10:06 am
RELATED TOPICS