It’s all for the ticket! 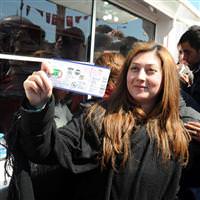 Fenerbahçe fans, awaiting their teams impending championship win on Sunday, spent the night camping out and playing hour’s worth of backgammon games while in line to be able to buy the high demand tickets that went on sale yesterday morning. There have even been offers of up to a 1,000 lira for season tickets to the final game.

FANS WAITED IN LINE OVERNIGHT
As anticipated, tickets for the Sivasspor- Fenerbahçe match this weekend are in high demand by Fenerbahçe fans. After the announcement was released that tickets would be going on sale yesterday, throngs of fans gathered in front of Sivasspor's ticket booth the night prior to secure themselves a spot in the stadium. Fenerbahçe fans spent the night camped out in front of the ticket booth to be able to support their team possibly win the championship this season. Some brought along blankets, while others passed the time playing backgammon and cards.
TICKET SALES UNDER POLICE SURVEILLANCE
As tickets went on sale at nine a.m., from time to time there were tense moments between fans trying to stake out their place in line. Police set up a barrier in order to establish an orderly line formation in front of the ticket booth. To prevent black market sales, every person in line was limited to buying only two tickets each.
SEASON TICKETS FOR A SINGLE GAME SOLD FOR 1,000 LIRA
Sivasspor's VIP season tickets are also in high demand, selling for 1,000 lira for those wanting to watch this historical game. The fact that these season tickets, which only sell close to such figures at the start of the season, are now going at such a high price for a single game just goes to show the amount of interest in this weekend's game!
THE STADIUM WILL BE YELLOW AND BLUE
While the Sivasspor club has put 11,780 tickets up for sale for Sunday's game, Fenerbahçe fans will be seated in the 3,968 spectator capacity pool-side and the 3,325 capacity station-side. With an approximate total of 8,000 tickets designated for Fenerbahçe fans, as well as a number of supporters anticipated to also be seated in the areas allocated for Sivasspor fans, the stadium is expected to be predominantly yellow and blue on Sunday. If Fenerbahçe beats Sivasspor, they are guaranteed the championship.