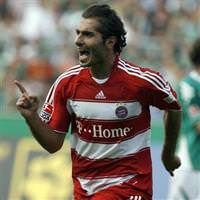 Real Madrid coach Jose Mourinho made the latest addition to his squad for next season on Thursday when the Spanish club agreed to sign German-born Turkey midfielder Hamit Altıntop from Bayern Munich.

The 28-year-old, whose deal with the Bundesliga club expires at the end of this term, had agreed a four-year contract, Real said in a statement on their website (www.realmadrid.com).
Altıntop is Mourinho's second signing since they lost out to champions Barcelona in the domestic league title race and the Champions League after fellow Turkey midfielder Nuri Şahin joined from Borussia Dortmund last week.
Together with Sami Khedira, Mesut Özil and Şahin, Altıntop is the fourth German-born midfielder to join the club since the Portuguese took the helm at the end of the 2009/10 campaign.
Özil, like Şahin and Altıntop, is of Turkish descent, though he opted to play for Germany at international level alongside Khedira, who has a German mother and Tunisian father.
Altıntop declined to negotiate an extension with Bayern after failing to hold down a regular starting place this term, when he made 14 appearances and scored two goals.
He joined the Munich-based club from Schalke 04 in 2007 and won a league and cup double in 2008 and 2010. He was a Champions League finalist last year when Bayern lost to Mourinho's Inter Milan at the Bernabeu.
He has made 64 appearances for his country and helped Turkey reach the semi-finals at Euro 2008, where he was included in UEFA's team of the tournament.