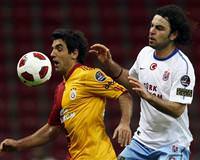 With Trabzonspor telling him he’ll receive as much money as Alex and will be the team’s leader, it turns out it was Selçuk İnan’s girlfriend who lives in Istanbul and Fatih Terim who intervened resulting in the player signing on to Galatasaray for the next five years…

Galatasaray has managed to sign one of their most popular transfer candidates, Trabzonspor's Selçuk İnan for the next five years.
The national player, who has up until now referred to his desire to play in Europe at every opportunity, has in recent days been regularly mentioned in connection to both Fenerbahçe and Galatasaray as a potential transfer. Yesterday, after meeting with Hasan Şaş, who is also most certainly to be brought on by Fatih Terim, Selçuk İnan went on to say 'yes' to Galatasaray.
How did it come to be that Selçuk, who will earn 2.1 million Euros, decided to sign with Galatasaray? SABAH reveals the backstage details… The Trabzonspor administration sat down with Selçuk during the season break in Antalya, however the star player stated that he wanted to go to Europe, and that they should talk again at the end of the season. As the time passed, and the second half of the league continued, Selçuk's name was repeatedly connected to Fenerbahçe. This also bothered Selçuk and he would continue to say the same thing, "I will be going to Europe." However instead of receiving an actual offer, İnan was only visited by a few managers of European teams. Fenerbahçe's interest in Selçuk was obvious and the young player did express that he was getting fed up in Trabzon and was considering the offer because of his girlfriend who lives in Istanbul. By April, Selçuk had decided his career would be coming to an end with Trabzonspor.

WHEN TERIM STEPPED IN...
Meanwhile, during all of this time Galatasaray did not show much interest in Selçuk. That is… not until Fatih Terim took over… Terim first called Selçuk to tell him he wanted him in Galatasaray. Selçuk could not decline his beloved coach Terim and asked him to wait until the league was over. Then, Trabzonspor Chairman Sadri Şener made a final offer in hopes of not losing Selçuk, stating "We will pay you as much as Alex. Be the leader of this team." (Alex receives three million Euros.) However, Selçuk did not accept the offer. It turns out his girlfriend and Istanbul were more important than the money and he had already set his sights on leaving Trabzonspor. Selçuk's meeting with Hasan Şaş yesterday was simply a formality as he had already said 'yes' a long time ago due to the Terim factor.