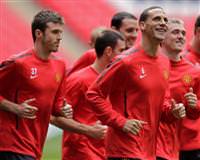 Barcelona and Manchester United clash in the Champions League final at Wembley on Saturday to decide who are the undisputed kings of Europe.

The Spanish and English league champions are seeking to lift the trophy for the fourth time to join Bayern Munich and Ajax Amsterdam, with only Liverpool (five), AC Milan (seven) and Real Madrid (nine) ahead of them in the roll of honour.

Both teams were set on their way at the old Wembley, with United beating Benfica in 1968 to become the first English team to win the trophy and Barca, with current manager Pep Guardiola in their lineup, beating Sampdoria at the stadium in 1992.

Despite the game taking place on English soil, Barca start slight favourites having cut a swathe to the final with their mesmeric midfield passing and the deadly finishing of Lionel Messi, who has 52 goals in all competitions this season.

United, who beat the Spaniards in the semi-finals in 2008, will look to the power of Wayne Rooney and the sharpness in front of goal of Mexican revelation Javier Hernandez while hoping retiring 40-year-old goalkeeper Edin van der Sar keeps one more clean sheet in the final game of his career.