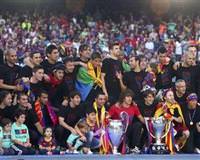 Pep Guardiola's Barcelona cemented their place in soccer's pantheon when they overwhelmed Manchester United 3-1 in the Champions League final to lift the European Cup for the fourth time on Saturday.

Goals by Pedro, the inspirational Lionel Messi and David Villa were a minimal reflection of the Spanish side's dominance over United, who they also beat in the 2009 final, as they lit up the Wembley night with their brilliance.

In an emotional presentation ceremony the giant trophy, for long the symbol of Barca's existence in the shadow of Real Madrid, was hoisted by French fullback Eric Abidal, back in action after an operation to remove a liver tumour in March.

"It's the way we played I'm most proud of," Guardiola said after his side consistently passed their way through and around a defence that had previously not conceded a single Champions League goal away from Old Trafford this season.

"The people watching could see that we not only won but we played a brilliant match," he added, before picking out Messi for special praise.

"Messi is the best player I've seen and probably the best I ever will see," he said of the Argentine man of the match.

"We have great players but he makes the difference and without him we would not have that difference in quality. He is unique. A one-off."

United manager Alex Ferguson had no complaints as his third final in four years ended with a second defeat.

"Nobody's given us a hiding like that but they deserve it because they play the right way and they enjoy their football," he said after his newly-crowned Premier League champions mustered only one shot on goal all night.

"We never really controlled Messi but many people have said that. We never closed the midfield well enough to counter them."

In fact, for the first 10 minutes amid a fantastic atmosphere, they did -- snapping into every tackle and pressing hard. However, just as in Rome two years ago, Barcelona settled into their rhythm and soon took control.

United defended desperately at times but were eventually undone after 27 minutes when Xavi delayed his pass just long enough to create space for Pedro to calmly tuck the ball beyond Edwin van der Sar, who endured a night to forget in the final game of his career.

United fashioned a well-made equaliser after 34 minutes when Rooney played a one-two with Ryan Giggs before sweeping the ball high into the net but if that lifted their spirits going into halftime it was not long before they were back fighting fires.

After more near misses, Barca duly went ahead in the 54th minute when United fatally stood off Messi on the edge of the box and the Argentine maestro drove the ball in for the 53rd and most important goal of his remarkable season.

It was also his 12th in 13 Champions League games this campaign, equalling Ruud van Nistelrooy's record tally for United in 2002/03.

Villa then curled a superb 18-metre shot into the top corner after 69 minutes and it was game over.

While the match was not the showdown many had hoped for, Barcelona's performance will live long in the memory of all who saw it and will further fuel the debate about where they sit in the game's all-time pecking order.

Guardiola, a midfielder for Barcelona when they won the first of their four European Cups by beating Sampdoria at the old Wembley in 1992, again refused to be drawn into comparisons, saying it was impossible to compare his side with the great teams of previous eras.

Ferguson, in charge of United for 25 years, was at least prepared to give them top billing in his period at the top.

"Great teams do go in cycles and the cycle they are in at the moment is the best in Europe," he said.

"In my time as manager I'd say they are the best team I've faced."