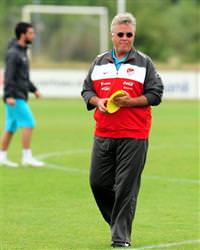 Coach Guus Hiddink, strongly linked in the media with the vacant job at English club Chelsea, said he and his Turkey squad were thinking of nothing but Friday's Euro 2012 qualifier in Belgium.

The Group A match is likely to determine who finishes second because Germany, with 15 points from five games, are favourites to top the table.
Belgium are second with 10 points from six games and Turkey (nine points from five) occupy third spot, with both teams scrapping it out for a likely playoff berth.
"Me and my team, we think of nothing but the Belgium game right now," Dutchman Hiddink said in an interview. "This is a key game.
"Nobody has knocked on my door yet, there is nothing concrete to discuss. My contract with the Turkish football federation is until 2012.
"It's not that easy to just leave and go away. Neither me, nor the football federation, has received any official offers." Both sides are without key midfielders -- Hamit Altıntop and Nuri Şahın for Turkey and Marouane Fellaini for Belgium.
Belgium coach Georges Leekens said his players should not be too concerned if they fall behind.
"They (Turkey) have reasonably attacking full backs so there might be some space at the back," said Leekens.
"We will go into the match with the aim of scoring twice. We must also not panic if we go behind."
Leekens appeared to want to keep the rest of his squad on their toes when he said goalkeeper Simon Mignolet and central defender Vincent Kompany were the only players certain to start.
Belgium have not qualified for a major tournament since the 2002 World Cup.
"I'm used to playing important matches for my club but with Belgium that's different. It is a long time since we had a match as important as this one," said Arsenal defender Thomas Vermaelen.
"The Turks are practically ready to die for their country but a victory is an absolute must for us."
Hiddink has been criticised for a lack of ambition after telling a news conference last week a draw would be acceptable as Turkey have a game in hand on Belgium.
Turkey also have fitness doubts over Fenerbahçe right back Gökhan Gönül.