Hiddink cannot guarantee he will stay with Turkey 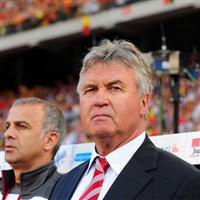 Guus Hiddink, strongly tipped by the media to take over at Chelsea, said he could not guarantee he would still be in charge of Turkey when the Euro 2012 qualifiers resume in September.

The Dutchman faced a barrage of questions about his future after Turkey drew 1-1 in Belgium on Friday.

Belgium and Turkey are chasing a playoff spot behind runaway Group A leaders Germany. Hiddink's team are one point behind the second-placed Belgians but have a game in hand.

Asked whether he would still be leading Turkey against Kazakhstan on Sept. 2, Hiddink told reporters: "I'm not, at this moment, in that position (to answer)."

"I always like to be very clear. I can formally say I have a contract until 2012."

Hiddink, though, said he had an opt-out clause in his contract with the Turkish football federation.

"When there are issues we can always talk. That's a very short answer, a clear answer," the 64-year-old added.

Asked if he had been in touch with Roman Abramovich, owner of 2010 English Premier League champions Chelsea, Hiddink said: "I'm on holiday now".

The Dutchman has had a distinguished coaching career, taking South Korea to the semi-finals of the 2002 World Cup and Netherlands to the last four of the 1998 tournament.

Hiddink spent a brief spell in charge of Chelsea in 2008-09, combining the job with his former role as Russia coach.