More than 60 killed in Syria protests 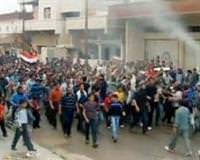 Thousands of protesters took to the streets after noon prayers on Friday in defiance of security forces determined to crush a revolt against President Bashar al-Assad's 11-year rule.

Sawasiah said 53 demonstrators were killed in the city of Hama, one in Damascus and two in the northwestern province of Idlib.

Seven people were also killed in the town of Rastan in central Syria, which has been under a military assault and a siege by tanks since Sunday.

It was one of the bloodiest days since the revolt broke out 11 weeks ago.

Security forces and snipers fired at tens of thousands of demonstrators gathered in the city of Hama, where 29 years ago President Hafez al-Assad, Bashar's father, crushed an armed Islamist revolt by killing up to 30,000 people and razing parts of the city to the ground.

Activists said at least 34 people were killed and scores wounded.

"The firing began from rooftops on the demonstrators. I saw scores of people falling in Assi square and the streets and alleyways branching out. Blood was everywhere," a witness who gave his name as Omar told Reuters from Hama.

"It looked to me as if hundreds of people have been injured but I was in a panic and wanted to find cover. Funerals for the martyrs have already started," he said.

In the southern city of Deraa, where protests first broke out 11 weeks ago, hundreds defied a military curfew and held protests, chanting "No dialogue with killers," two residents in the city told Reuters. The protest later broke up.

Syrian forces also opened fire on demonstrations in the eastern city of Deir al-Zor and in Damascus' Barzeh district.

"Tens of thousands turned up in Hama and Idlib in the biggest demonstrations since the uprising began. This is a natural reaction to the increased killings and lack of seriousness by the regime for any national reconciliation," said Rami Abdulrahman of the Syrian Observatory for Human Rights.

One person was killed in Idlib, he said.

Activists and residents said thousands of people marched in the northwesterm province of Idlib, Kurdish northeast, several Damascus suburbs, the cities of Homs and Hama and the towns of Madaya and Zabadani in the west.

Syrian authorities blame the violence on armed groups, backed by Islamists and foreign powers, and say the groups have fired on civilians and security forces alike. Authorities have prevented most international media from operating in Syria, making it impossible to verify accounts of the violence.

Activists say there have been some instances of citizens resisting security forces by using personal weapons, and of security police shooting soldiers for refusing to fire at protesters.

The activist who declined to be named said that before the shooting started protesters burnt the Baath Party office in Hama and said it was not clear how the shooting broke out.

Assad has responded to protests by sending tanks to crush demonstrations in certain flashpoints and by making some reformist gestures, such as issuing a general amnesty to political prisoners and launching a national dialogue.

But protesters and opposition figures have dismissed these measures. The cities and towns of Deraa, Tel Kelakh, Banias and Rastan have undergone intense crackdowns by the military.

Western powers have condemned Assad as the unrest spreads and the death toll rises.

The United States, the European Union and Australia have imposed sanctions on Syria, but perhaps because of reluctance to get entangled in another confrontation such as Libya, and wary of provoking more instability in a region still in the midst of an "Arab Spring," their reactions have been less vehement.

Opposition figures meeting in Turkey called on Assad to resign immediately and hand power to the vice president until a council was formed to introduce democracy to the country.