Much more than a point 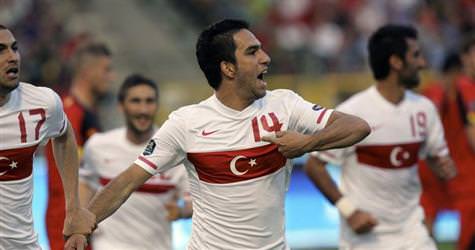 Turkey came from behind to draw 1-1 with Belgium on Friday, a result that leaves the visitors best placed to secure second spot behind runaway leaders Germany in Euro 2012 Group A qualifying.

Belgium maintained their one-point cushion over Turkey but wasted a great chance when Axel Witsel missed a penalty with 15 minutes left.
Turkey, coached by Chelsea target Guus Hiddink, have a game in hand on the Belgians in the chase for a playoff spot. Germany lead the way with 18 points from six matches.
Hiddink described it as "a very good result".
"We can be satisfied with a draw," the Dutchman told reporters. "We started very sloppily ... it was a stupid foul (by Arda Turan) to give away the penalty and we were lucky they missed it.
"I don't think the team would have had the power to overcome it," added Hiddink before deflecting away a series of questions about his future.
Belgium opened the scoring after four minutes, Marvin Ogunjimi grabbing his fourth goal in six matches as he profited from a slip by Turkey left back Caglar Birinci.
The visitors equalised midway through the first half when Arda Turan ran down the right and set up Burak Yilmaz for an easy tap-in.
Belgium had chances to go back in front before Turan presented them with a golden opportunity in the 75th minute when he brought down substitute Dries Mertens, only for Witsel to blaze his penalty over.
Coach Georges Leekens said his Belgium team deserved to win because Turkey had clearly come for a draw.
"It doesn't change a lot," said Leekens. "There's no disappointment ... except for the result." He also refused to criticise Witsel for his penalty miss. "I don't blame anyone who takes the responsibility ... we should have put in the other chances but it was a turning point." The Belgians have not qualified for a major tournament since the 2002 World Cup.