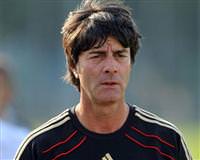 Unbeaten Germany are targeting a seventh consecutive win in the Euro 2012 qualifiers on Tuesday while defeat for hosts Azerbaijan could seal the fate of their under-fire coach Berti Vogts.

Germany, who called up Lewis Holtby and Sebastian Rudy on
Sunday as injury replacements, top Group A with 18 points from
six games after their 2-1 win in Austria on Friday.

Belgium are second on 11 points from seven games and Turkey
third on 10 from six. Azerbaijan are level on three points with
last-placed Kazakhstan.

At the end of a long season and without midfield dynamos
Bastian Schweinsteiger and Sami Kehdira, Germany coach Joachim
Loew is pushing for another win that would all but seal their
qualification for next year's tournament in Poland and Ukraine.

His only out-and-out forward, Mario Gomez, has been in
superb form in recent months and could add to his 45-goal tally
that includes strikes for club and country in all competitions
in the past season. Gomez struck twice against Austria.

"I am fully confident that my players will do their job well
in Azerbaijan," Loew told reporters. "We know we need to dig
deep because we are at the end of a long season. It will not be,
however, a walk in the park because even Turkey lost there."

Loew's compatriot Vogts has problems of a different kind
after he was attacked by three men at a news conference on
Sunday following his team's 2-1 defeat to Kazakhstan on Friday.

Vogts, who won the 1974 World Cup as a player and coached
Germany to the 1996 European title, escaped unhurt as security
guards stepped in at the last moment as the men tried to hit him
with a coffee pot and toilet rolls.

"I would have long left if it was not for my friendship to
the federation president," he said. "I have experienced many
things but nothing like that. I do not have the words to
describe this."

Vogts is already being linked in the media with a possible
move to Turkey should Guus Hiddink take over English Premier
League side Chelsea.