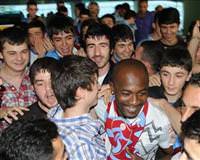 Ivory Coast player Zokora, aka Maestro, has signed a four year contract to play with Trabzonspor. Upon his arrival to the Black Sea city, Zokora stated, “The fans have pleased me. I have never been greeted with this amount of interest.”

Worldwide famous footballer Didier Zokora is now with Trabzonspor… The Ivory Coast star was greeted by throngs of Trabzonspor supporters. Zokora has signed on to play four years with the team, at 1,625,000 Euros annually.
"I am so happy to be in Trabzonspor. My departure from England to Seville transpired very quickly and now the same has happened with my arrival to Trabzon. I have arrived to a team that lost out on the championship in the last minute. The money doesn't matter that much to me. I know that the Super League is very high quality." Zokora also went on to state that he was mesmerized by the number of fans that came out to greet him.
DİDİER DROGBA WILL BRING QUALITY!
When asked about the possibility of Trabzonspor transferring two of Seville's other stars Kanoute and Romaric, Zokora simply stated, "the chairman knows best." However when asked about Didier Drogba, who is on Galatasaray's transfer list, Zokora states, "With a player of Didier Drogba's class to come to Turkey, the Super League's quality would go up and the league would be followed."