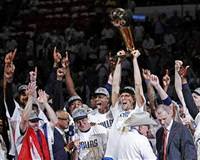 The Dallas Mavericks ended three decades of frustration by capturing their first championship with a 105-95 victory over the Miami Heat on Sunday to win the best-of-seven NBA Finals 4-2.

Guard Jason Terry came off the bench to score 27 points and lead a long-range assault by the Mavericks, who connected on 11 of 26 from beyond the arc.

"We're a resilient bunch, and we saw it," said Mavericks forward Dirk Nowitzki, who averaged 26 points per game and was named the series MVP.

"This whole series we were down. We kept battling back. Kept believing in each other. This is a win of team basketball."

Nowitzki hit only nine of 27 shots but, as he had been all series, excelled as the game entered its final stages, scoring 10 of his 21 points in the final quarter to snuff out any Miami hopes of a comeback.

The Mavericks reached the finals in 2006 but lost to Miami in six games.

"I don't think there's any doubt after this series that Dirk has certainly earned the clout of being one of the all-time great players," said Maverick coach Rick Carlisle.

"His versatility, how he's done it in the clutch. He goes one for 12 in the first half, and then in the second half he was just absolute money."

Nowitzki said winning his first championship was "extra special" because he was "always coming up a little short" in pursuit of a title.

"If I would have won one early in my career, maybe I would have never put all the work and the time in that I have over the last 13 years," he said. "So this feels amazing."

LeBron James paced the Heat with 21 points but had a quiet game after the first period when he scored nine. Chris Bosh added 19, Mario Chalmers 18 and Dwyane Wade 17.

James came up short in his championship chase after having teamed up with fellow free agent Bosh to join Wade in Miami last summer as part of the so-called "Big Three."

"I've been in this league eight years," said James, who hit nine of 15 shots and had six assists. "There's no distractions that can stop me from trying to chase an NBA championship.

"It hurts of course. I'm not going to hang my head low. I know how much work as a team we put into it.

"You can never hang your head low when you know how much work, how much dedication you put into the game of basketball when the lights are off and the cameras are not on."

Dallas, buoyed by eight points from Nowitzki and six from Jason Kidd, outscored the Heat 28-21 in the third quarter to take an 81-72 lead into the final frame.

The Heat never got closer than seven the rest of the way, despite being urged on by 20,000 at American Airlines Arena.

Dallas hoists the Larry O'Brien Trophy for the first time in the franchise's 31-year existence.

"They just kept their composure and kept coming in waves. And when it was time, they just stayed tight and they executed very well."

"We've been through a heck of a lot this season, where in many ways it felt like two seasons built in one," he said. "There's no excuses. There's no blame. Sometimes you simply come up short.

"One day we'll probably be able to look back on this, sometime this summer, when the emptiness and the pain leaves, and we'll feel better about what happened."