The transfer show of the century 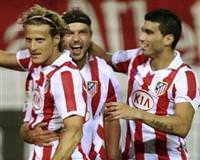 Galatasaray has looted Atletico Madrid for its players! Flying to Madrid yesterday morning by private plane, Chairman Ünal Aysal proceeded to bargain for four hours until he had secured players Forlan, Reyes and Ujfalusi, thereby fulfilling the promise he made to the club’s fans.

Galatasaray Club President Ünal Aysal went to Madrid yesterday, determined to keep his promise to the fans that he would be bringing on a star player. By evening last night, Aysal had finalized the transfer of the Forlan-Reyes-Ujfalusi threesome and had announced the news to the bourse.
Here's what transpired in yesterday's eventful day for Galatasaray…
With plans to meet with the Atletico Madrid President, yesterday morning Ünal Aysal and administrators Abdurrahim Albayrak, Ali Gürsoy and sporting coordinator Bülent Tulun arrived to Atatürk Airport.
There, Galatasaray President Ünal Aysal's private plane was prepared for take-off. Last month, Aysal purchased a TC-ASL patented tail Bombardier Challenger 604 type jet for 11 million Euros, which they boarded yesterday at 11:00 with a destination of Spain's capital, Madrid.

JORGE MENDES INTO PLAY
Atletico Madrid President Enrico Cerezo was accompanied by the club's major partner Gil Marin and the newly appointed sporting director Caminero for deliberations with Ünal Aysal and Bülent Tulun which was mediated by Manager Jorge Mendes, well-known for his big role in securing Beşiktaş' transfers. Galatasaray agreed with Atletico Madrid on a 15 million Euro total transfer fee for the three players. During deliberations with the players themselves, Galatasaray had offered three year contracts, to which Ujfalusi and Reyes have agreed in principle. Due to the Copa America, Forlan is currently at a training camp with the Uruguayan national team, however according to the information obtained; he will be finalizing the agreement as soon as possible.
FOR GOALIE, THE STRINGS ARE IN TAFFAREL'S HANDS
With Muslera's resistance and failing to finalize the Lazio and Cana transfers, and upon Fatih Terim's initiative, Galatasaray has left the duty of finding a goalie to the new goalkeeper trainer Taffarel.
According to information obtained, the legendary Brazilian goalie's first candidate is Doni, who Roma is willing to part with. The day before yesterday, Doni refused an annual one million Euro offer from Liverpool. .