Five out of five for Fenerbahçe 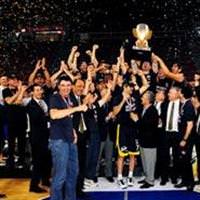 Fenerbahçe Ülker managed a victory once again against Galatasaray Café Crown in the Abdi Ipekçi Sports Center, securing a 4-2 lead in the playoffs and the championship win. With this fourth championship title in five years, Fenerbahçe closed out a difficult season marked with injuries, by winning two cups.

With a 4-2 win in the Basketball League Playoffs, Fenerbahçe are now the champions. This year, the Fenerbahçe club has won five separate championships in the 2010-2011 season in their three main branches, football, basketball and volleyball.
It had been 26 years since the two mega basketball clubs have faced off in the play-offs together and the series came to an end last night with an amazing finish.
Fenerbahçe Ülker has celebrated four championship wins over the past five years. Even though the team has been rattled by injuries, each time they pick themselves up and pull themselves together to show once more that they are a team. Galatasaray Cafe Crown on the other hand deserved accolades for their struggle on the court. The fact that both teams' scores were in the 80's is evidence of the players' physical and mental exhaustion. It was Fenerbahçe's Ömer Onan who made five points in a row after falling behind by 80-79, who thereby became the engineer of the series win. Sean May's six rebounds and ten point contribution was also of value last night. Oğuz scored 19 points and six rebounds after a rough start, yet managing to turn it around.
HIGH TENSION
The first half ended with a 49-49 draw, and in the second half a technical foul issued to Jasikevicius for complaining about a split eyebrow and Oğuz Savaş' error being overseen by the refs resulted in escalating tension.
Fenerbahçe went into the fourth quarter with a 69-66 lead. The final period was one to remember as the score lead shifted from one team to the other. Galatasaray shot a six point series, bringing them up to 80-79 with just two and a half minutes left in the game. Fenerbahçe had regained the lead with five points by Ömer and just 49 seconds left, ringing the score to 84-80. However the Shumpert-Johnson duo in Galatasaray managed to recover the lead at 84-85 and just 13 seconds remaining. Galatasaray maintained the lead with a three pointer with 0.2 left on the clock bringing the score to 88-89, however last second free shots scored by Ukiç managed to secure the victory and the championship title for Fenerbahçe.