Ronaldo and Irina are in Bodrum 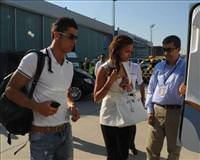 As guests of Beşiktaş Club Chairman Demirören, Ronaldo moved on from Istanbul to Bodrum yesterday to enjoy a three-day blue cruise. Experiencing both pleasure and fear at the immense crowds that gathered to welcome the Portuguese's player to Istanbul, Ronaldo asked if Bodrum was going to be anything like this. Ronaldo was especially shocked to see the throngs of fans waiting to see him on İstiklal Caddesi and he commented, 'It's both amazing and terrifying." Demirören assured the star player by stating, 'Don't worry, a very peaceful and beautiful vacation awaits you in Bodrum."
A FAN OF THE BOSPHORUS
Meanwhile, according to sources, while Ronaldo flew to the Çırağan by helicopter, he was mesmerized by the Bosphorus Strait, and stated, "It's as beautiful as they say it is." The footballer did not go out last night, but he did have breakfast with a view of the sea.
THREE-DAY BLUE CRUISE
Ronaldo landed in Bodrum airport yesterday morning, flown in on Demirören's private plane. He was also received with much interest and went to his next destination in a black minibus, accompanied by a five-car convoy. Arriving in Bodrum's Yali district, Ronaldo then boarded Demirören's Ziya-1 boat, where both Ronaldo and Shayk will enjoy a three-day tour.