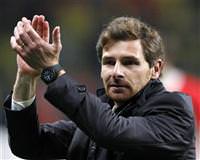 New Chelsea manager Andre Villas-Boas said it was inevitable he would be compared with his mentor and former Stamford Bridge boss Jose Mourinho.

Villas-Boas was a member of the backroom staff when Mourinho was in charge of Chelsea from 2004-07 before following his fellow Portuguese to Inter Milan.

"There is no way you can avoid comparison. It is something that interests the media," Villas-Boas told the club's website (www.chelseafc.com) on Wednesday after leaving Porto to sign a three-year contract with the Premier League club.

"(But) I didn't take the Porto job nor the Chelsea job because Jose made the same steps. They are two of the most sought-after clubs in the world and in the end I had the opportunity."

The 33-year-old acknowledged that he had experienced a remarkable rise up the managerial ladder after leaving Mourinho's backroom staff at Inter to take over as coach of Portuguese championship team Academica in October 2009.

"It is something that went crazy, there is no doubt about it," said Villas-Boas. "In two years we have achieved so many things and they were two very happy years.

Villas-Boas said he felt the time was right to break out on his own at Academica.

"When a chance to coach happened when I was at Inter, I just felt inside me that I wanted to take on another role and face the challenge... so I left Jose," he explained.

"Coaching had not been an obsession and neither did I use Jose to arrive down that path. It was something that happened naturally and at the moment it is working out well."

Villas-Boas joined Academica when they were bottom of the league and steered them away from the relegation zone before joining Porto in June 2010.

He then led his hometown club to a title treble in the Europa League and Portuguese league and cup as Porto became the first team since 1978 to finish the season unbeaten.

"The split from Porto is not something that was easy for me because it is my club," said Villas-Boas. "Oporto is my city and there is no running away from it.

"Porto supporters will always feel like there is nothing I can say that will delete their sense of betrayal. But I felt this was a challenge I needed to make (at Chelsea)."

Villas-Boas, the seventh manager to be appointed at Chelsea since Russian billionaire Roman Abramovich took over as owner in 2003, said he would focus his off-season attentions on winning over the players at Stamford Bridge.

"The most important thing is to motivate the players to get their ambitions right, to reflect again on what the club has achieved in the last six years," he said of the 2005, 2006 and 2010 Premier League champions.