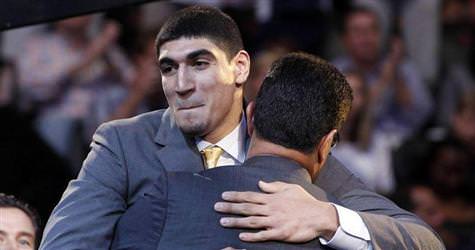 Last night the NBA selected the first round of players for the 2011 draft. Enes Kanter was selected third, marking a record-breaking success for the Turk.

Selected third, Turkish basketball player Enes Kanter has gone down in history for being the first Turk to make the top five in the NBA draft. When his name was announced third in the 2011 NBA Draft, Kanter had an emotional moment. Thanking Kentucky city and University for their support, despite the fact that he didn't don a uniform last season, Kanter also expressed how happy he was to be playing with Mehmet Okur.
Kanter and Okur to be teammates
It was Mehmet Okur's team, Utah Jazz that selected Enes Kanter, making him a historical success.
Enes has had a promising career this far. In 2009, at the Nike Hoop Summit, Enes scored 34 points and a 13 rebound double-double, beating the record set by German player Dirk Nowitzki who plays for the NBA champions, the Dallas Mavericks.