No matter how much we applaud it will never be enough… 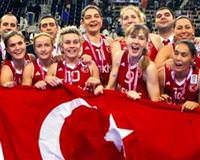 Our basket fairies fought hard against a Russian team with a notable physical advantage last night for the finals of the European Women’s Basketball Championship, however managed to secure a silver medal, marking the nation’s biggest success yet in women’s basketball.

Turkey's fairies of the hoop are experiencing the pride of transforming a fairy tale into real life. Having displayed a performance worth accolades taking them all the way to the European Championship finals, despite shedding blood, sweat and tears they were unable to surpass their Russian rivals last night. The Russian team became Europe's champions with last night's victors by 59-42 and Turkey came in second, marking the greatest success achieved by Turkey's women's basketball team yet.
Despite starting off strong with Nevriye Yılmaz's score, by the end of the first quarter, Russia's Korstin, Danilochkina, Arteshina and Stepanova had secured a 19- 8 lead. In the second quarter, offensive player Irina Osipova's shots and Marina Kuzina's three-pointer helped the Russian's gain a 24-8 point lead. Turkey's fairies came back with scores by Birsel Vardarlı and Şaziye İvegin, bringing it up to 24-12. With two three-pointers scored by Bahar Çağlar and Şaziye İvegin, Turkey managed to close the gap to just five points, however Russia's comeback with a three-pointer by Arteshina and a basket by Stepanova brought the scored difference back to ten, at 33-23 points going into half time.
RUSSIA WINS CHAMPIONSHIP FOR 24TH TIME
Russia started off the second half strong with points scored by Elena Danilochkina and Maria Stepanova, bringing the scoreboard up to 39-23. After mutual scores by Nevriye and Vidmer, the tempo began to drop, with Russia successfully maintaining their lead in points. By the 28th minute of the game, Birsel Vardarlı's penetration activated our national team's offense, bringing the score up to 46-30. Within the final minute of the third period a basket by Işıl Alben solidified the 46-34 scored going into the final period. The fourth quarter began with a three-pointer scored by Russia's Elena Danilochkina. With missed shots by Birsel and Nevin, Russia maintained their superiority throughout the final minutes of the game, even managing to bring the lead up by 19 points with Maria Stepanova and Elena Danilochkina's offensive. In the end, Russia secured the championship victory with a 59-42 point lead.
A FLOCK OF TURKS TO POLAND!
State Minister Faruk Nafiz Özak, Youth and Sports General Manager Yunus Akgül, Turkey Basketball Federation Chairman Turgay Demirel, TBF Administrative Board Members and officials , club representatives, former national basketball players and the National Youth Girl's Team were all in the stands to offer their support for Turkey's fairies. In addition, there were approximately 1,000 Turkish supporters in the tribunes from a variety of countries in Europe and Turkey showing their support throughout the game.