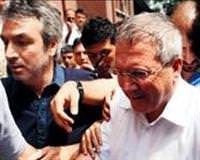 Turkey's football federation said on Tuesday it will act swiftly in response to nationwide match-fixing allegations, without waiting for the outcome of a judicial investigation which emerged at the weekend.

Police have detained some 60 people, including the chairman of champions Fenerbahce, since Sunday in a probe which has sent shockwaves through Turkey, hit clubs' share prices and triggered uncertainty surrounding a multi-billion dollar league.

More than 20 of the suspects have already been sent to an Istanbul courthouse after questioning at police headquarters. There they face prosecutors before the court rules whether to remand them in custody or release them.

Federation chairman Mehmet Ali Aydinlar met the prosecutor handling the case on Tuesday, under pressure to act soon. The Turkish league begins on Aug.7 and UEFA has set a deadline of July 15 for confirmation of the team taking part in the third Champions League qualifying round.

"The investigation may take a long time. Hence we must act according to the evidence," Aydinlar told reporters after meeting the prosecutor and before meeting the Istanbul chief of police.

"There is little time. We will use this period well. We will conform to the calendar."

Fenerbahce, which is at the centre of the probe and whose chairman Aziz Yildirim is the highest profile detainee, won the league for a record 18th time last season. It and second-placed Trabzon have qualified for the Champions League.

If any clubs are found guilty of wrongdoing they could face exclusion from competitions, relegation to a lower division and the loss of potentially tens of millions of dollars in income.

Any individuals convicted of crimes could face lengthy prison sentences.

Police launched raids in 15 provinces across Turkey on Sunday, searching club premises and detaining players and administrators in connection with the allegations.

Turkish media on Tuesday cited allegations in police reports such as a forward being offered money not to score in one game, a goalkeeper deliberately failing to prevent a goal and a club requesting a particular referee for a key derby match.

Shares in the listed company of Istanbul club Fenerbahce tumbled 15 percent on Tuesday, bringing its losses in the last two days to more than 30 percent. Other clubs shares suffered much smaller falls.

Fenerbahce said in a statement it had not been involved in any wrongdoing and expressed its faith in the justice system.

Yildirim has been receiving medical treatment since he was detained early on Sunday.

Among matches being investigated were two Fenerbahce games, both of which they won against Eskisehirspor and Sivasspor last season.