A 39-year legend is arrested 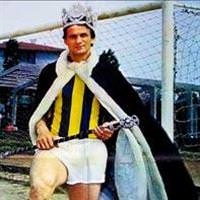 One of Fenerbahçe’s legendary footballers Cemil Turan has also been apprehended in the recent match-fixing operation which has rocked the Turkish football league and placed in the Metris Penitentiary.

When Turan was first transferred to Fenerbahçe 39 years ago, it was a time of pashas and an underground world involving a number of famous figures, guns were drawn and threats thrown around in the air.
Turan, the first football figure whose transfer was talked about by millions, now finds himself involved in hundreds of thousands of dollars worth of allegations of match-fixing. Cemil began playing football at a very young age and by the time he was 16 and playing for Sarıyer, he quickly became a favorite for a number of clubs. By scoring 79 goals in 128 matches played for İstanbulspor, Turan found himself on the transfer list for both Fenerbahçe and Galatasaray. It was the year 1972 and both arch rivals wanted to assign Turan their colors. While İstanbulspor administrators favored his transfer to Galatasaray, Turan's heart was set on Fenerbahçe. In fact he reached an agreement with Fenerbahçe, however his club refrained from letting him go. Even a number of pashas were involved in securing Turan's transfer. In addition to Air Forces Commander Muhsin Batur, a number of high ranking officers also attempted to persuade İstanbulspor to let Turan transfer to Fenerbahçe.
KIDNAPPED BY INFAMOUS HOODLUM
Upon İstanbulspor's insistence to hold onto Turan, one of Kasımpaşa's most famous hoodlums' Sultan Demircan came into play. Demircan proceeded to threaten the İstanbulspor club president and theN kidnapped a willing Turan who he hid out in his summer villa. Meanwhile, İstanbulspor;s President was also kidnapped by unidentified perpetrators and was threatened to let Turan leave the team. Guns were drawn for this transfer. Stuck between weapons and hoodlums, Turan was nearly ready to give up playing altogether. However after this tumultuous time, Turan was rented out to play for Fenerbahçe. A transfer fee of one million, 475 thousand lira was paid out for Turan, making him not only the first transfer to be dragged into the underground world, but also the first to be dealing in the millions. During the time he was rented out, Turan was constantly followed by civilian police, soldiers as well as other football clubs. In his first game he came out in the starting line-up against Galatasaray. In his first season, Turan lifted both the Turkey and Presidential Cups. He later went on to achieve countless successes with Fenerbahçe. With three championships and three goal king titles, throughout his career Turan managed to score 376 goals out of 632 games played. Turan has donned a national team uniform a total of 54 times and was awarded a medal of honor with the National Team, He has served as caption for both Fenerbahçe and the A National Team.
HELPING OUT GALATASARAY
During the 1979-1980 season, Turan played in a game which was crucial for Galatasaray to remain in the league. According to a special written series prepared for Fenerbahce's 100th year anniversary, dialogue between Cemil Turan and Galatasaray's Öner Kılıç at that time went down as follows: Cemil said to Öner, "Why are you shaking?" Öner responded with, "Brother you know the situation is bad. If we lose to you it will take a miracle for us not to be relegated from the league." Cemil consoled him by saying, ''My boy, what are we going to do if there are other teams that could be dropped from the league? Are we going to let Galatasaray drop out of the league? It wouldn't suit us. Those other teams can be relegated. You just play ball and the score will be 0-0." Sure enough, when the game ended in a draw, Galatasaray was further away from the relegation line. In 1980 Turan played his jubilee, however he did not break away from football nor Fenerbahçe. Turan, who has served as Fenerbahçe's football department administrative manager, most recently was the team's infrastructure coordinator.
"I HAVE NEVER BEEN INVOLVED IN MATCH-FIXING IN ALL OF MY YEARS…"
Cemil Turan to the judge's investigation by stating, 'In all of my years, I have never been involved in any sort of match-fixing incident. I have never rigged a game for or against another team. I have never been a middleman for any footballer nor offered any money." Expressing that he does not know Musa Aydın or his father, Turan states, "I did not give them money for match-fixing through Bülent Uygun. Nor did I try to make any contact. I am innocent and I request to be released." Turan's lawyers explain that Turan is only being accused in connection to third person conversations and those allegations of match-fixing are false. Turan's attorney's also pointed out that in the game in question, Musa did score and Can Arat and İskender were not in the line-up, however Turan still wished Arat good luck.