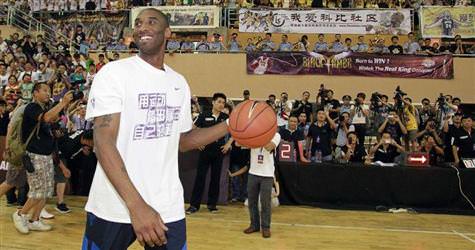 Los Angeles Lakers All-Star guard Kobe Bryant's representatives will meet with officials of Turkish club Beşiktaş next week to discuss the possibility of him playing in Turkey during the National Basketball Association (NBA) lockout.

Şeref Yalçın, head of basketball operations for Beşiktaş, told reporters in Turkey he was hopeful of landing the five-time NBA champion and Olympic gold medalist.
"At the moment there's a 50 per cent chance that Kobe may come to Turkey," Yalçın was quoted as saying. "Everything will be clearer after the meeting on the (July) 30th."
Beşiktaş already has signed New Jersey Nets guard Deron Williams to play during the lockout and last year signed former NBA MVP Allen Iverson.
Bryant has not confirmed his plans but has said he would be interested in playing in either Turkey or China if the NBA season was delayed because of the lockout. He already has an endorsement deal with Turkish Airlines.
The 13-time All-Star, 32, has three years remaining on his Lakers' contract and Yalçın said Beşiktaş, which begins play in October, had asked the international basketball federation for its approval of any Bryant deal.
"Kobe wants some time to think about it," Yalçın said. "We believe that his response is going to be positive. Money will not be a problem."
Other NBA players also have expressed interest in playing overseas during the lockout and the players' union has encouraged athletes to make the trip while there is no basketball in the NBA.
NBA owners locked out the players on July 1 after the talks failed on a new collective bargaining agreement. Both sides are far apart and no new negotiations have been scheduled, leading to possibility all or part of the 2011-12 season could be canceled.