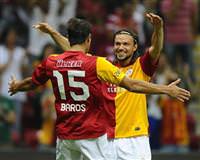 Galatasaray came on strong to a substitute-heavy Liverpool last night in a friendly played in Istanbul. Milan Baros took good advantage of two assists by Ujfalusi against his former team while Johan Elmander put the final stamp on the match.

Galatasaray's first game played for fans this season just so happened to be last night's friendly against Liverpool. The team was obviously well missed as even though this was a preparation game for the season to come, a significant portion of the tribunes were filled. Those curious to see whether their game-playing skills displayed against Inter were in fact just that or simply a coincidence had received their answer in just the eighth minute of the game. A pass by Kazım was met by Ujfalusi, who went on to make a very nice assist to Baros, who was waiting in the penalty field. Baros responded with an excellent shot, scoring the first goal for the home team; 1-0. From this point on, Galatasaray continued to stake out Liverpool's goal post, with new transfer Melo leading the pack including an effective offense displayed by Uffalusi, Sabri and Kazım.

A WELL-PLAYED GAME DESPITE THE HEAT
In the 40th minute, a corner shot by Selçuk was headed by Ujfalusi to Baros, who was waiting in place. The Czech forward and former Liverpool player sent the ball straight into the net, bringing the score up by two: 2-0. Galatasaray continued to play well into the second half of the game, drawing attention to their determination despite the heavy humidity. In the 84th minute, Elmander played an excellent volley from all the way outside the penalty field, scoring the game's third and final goal: 3-0. With Fatih Terim at the helm, Galatasaray has regained support and admiration from the team's fans while signing on to a significant success against one of Europe's most lucrative teams.