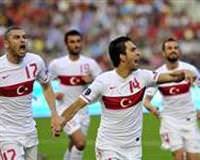 World champions Spain will face former world champions France in their campaign to qualify for the World Cup finals in Brazil in 2014 following Saturday's gala preliminary round draw.

Spain, who are also the European champions, were the last name drawn in the European qualifying zone and the last of the 166 countries to be allocated a place in the 107-minute globally televised event in a windswept auditorium at Rio's glamouros Marina da Gloria.

High winds buffeted the temporary building before the draw started, causing slight damage to the roof, but inside stars of showbiz and soccer were unaffected with Pele given a huge welcome when he was introduced to the audience.

Pele, who won three World Cups with Brazil, took no formal part in the proceedings but another former Brazil striker Ronaldo, the World Cup's record scorer with 15 goals, drew Spain's name out to place them alongside Belarus, Georgia and Finland in the five-team Group I.

The other eight European groups consist of six teams.

French coach Laurent Blanc, in Rio unlike Spain boss Vicente del Bosque, said afterwards: "We had to face one of the top seeds, and we got the biggest because we are somehow in the second group of seeds. We should have been in the first group -- and now we have drawn the best team of the last World Cup, but then, you have no choice."

With only the group winner assured of an automatic place in the finals, one of Spain or France will most likely have to qualify through the playoffs to reach Brazil.

The European draw, was, as always, the highlight of the proceedings and produced some tantalising battles when the qualifiers start in the autumn of 2012 after the European championship in Poland and Ukraine.

Coinicidentally those two co-hosts were drawn in the same group along with top seeded England, who have faced Poland in seven previous World Cups.

Montenegro, who are also in England's group for the Euro 2012 qualifiers, were placed in the same group as tiny San Marino.

There will be plenty at stake too when seeded Croatia and Serbia, once part of the old Yugoslavia, meet each other in Group A which includes British rivals Scotland and Wales as well as Belgium and Macedonia.

The Netherlands, runners-up to Spain in a bad-tempered World Cup final last year and on course for the Euros next year having won all six of their qualifiers so far, face Hungary, who they beat 5-3 at home and 4-0 away in their Euro qualifiers in March. Turkey, Romania, Estonia and Andorra complete the group.

Dutch coach Bert Van Marwijk told reporters: "Our group has three really big football nations, Romania, Hungary and Turkey. I think Turkey are the highest ranked at the moment, they will be the most difficult opponents. We played a friendly against them recently and won 1-0 but it was a very hard game."

Triple World champions Germany should have little trouble qualifying from Group C that includes Sweden and Ireland, Austria and the Faroe Islands.

Draws for five of FIFA's six confederations took place with no draw for the South American zone as their nine teams play in one league. Hosts Brazil have qualified automatically for the first finals they will stage since 1950 and either four or five South American neighbours will be hoping to join them.

Four will qualify automatically and an extra one will take their place if they beat an Asian qualifier in a playoff.

African champions Egypt should coast through to the next round of their competition after being paired with Guinea, Zimbabwe and either Comoros or Mozambique who play in a preliminary qualifier.

South Africa, who hosted the last World Cup, face neighbours Botswana as they attempt to reach the finals for the fourth time.