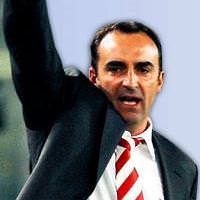 The Beşiktaş Club administration has made a strange decision, in the way of bringing on Carvalhal as technical director until Havutçu is released from custody. The Portuguese technical director will serve the team under the title of assistant trainer.

The chaos surrounding the question of who will act as Beşiktaş's technical director due to the arrest of Tayfur Havutçu in connection to nationwide match-rigging allegations appears to have finally subsided.
After seeking out a new technical director for the team, the administration has finally reached a deal with Carlos Carvalhal. Laying the issue to the table at an administrative meeting held yesterday, the club has decided to leave the team in the hands of the Portuguese trainer. According to an announcement by the club, Tayfur Havutçu will continue on as technical director pending his release.
A STRANGE ANNOUNCEMENT
"Taking into consideration the fact that it is currently impossible for our coach to actively direct the team; we have assigned Mr. Carlos Carvalhal, who joined the team during the Austria camp and has met with our coach, the title of assistant coach. Upon request by technical director Havutçu, Carvalhal is joining the technical team and will begin working with the team upon its return to Istanbul. As the public is well aware due to recent developments, a unanimous decision has been reached by the club to have Carvalhal serve as coach and proxy technical director until Havutçu returns."
CARVALHAL BEGINS TRAINING TODAY
While the Portuguese coach was expected to join the team during their camp in Holland; instead he changed his schedule to arrive to Istanbul yesterday and will be joining the training session today.