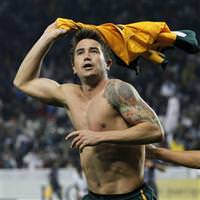 Harry Kewell's protracted search for a new club may be injected with a little urgency after he was told in no uncertain terms that he needed to get fit to win a place in the Australia squad for the World Cup qualifiers.

The former Liverpool forward was released by Turkish club Galatasaray at the end of last season and has been involved in negotiations with at least two local A-League clubs, while also being touted to teams across Europe.

The 32-year-old was left out of the Socceroos squad to play Wales in a friendly in Cardiff on Aug. 10 and national coach Holger Osieck was unequivocal when explaining why he had been omitted while Lucas Neill, also clubless, had been included.

"There is a slight difference between the two of them. One is fit and one is not fit," Osieck said in a teleconference.

"Lucas has done a lot of work ... but Harry is not in very good shape ... so he is definitely not in a position to play right now."

Australia's first world class player, Kewell has spent his entire senior career in Europe after going to England as a 15 year old for a trial with Leeds United.

Although his signing would be a major coup for his domestic suitors, he and his agent have been pilloried in the Australian media for their financial demands, which included a cut of the gate for away matches.

Melbourne Victory and Sydney FC are reported to be still in the hunt for his signature and have some leeway with two months to go until the start of the new A-League season.

The international season, however, is fast approaching.

The Socceroos, who Kewell has represented 54 times including at two World Cups, open their qualifying campaign when they host Thailand on Sept. 2.

"We all know what value Harry brings to the team," Osieck added. "I am really hoping he will be in game shape for the qualifiers."