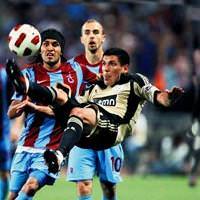 Three players were sent off as Malmo snatched an 80th minute equaliser to draw 1-1 at home to Rangers and go through 2-1 on aggregate.

Dynamo, who took part in the group stage for 12 seasons in a row until 2009/10, will miss out for the second time running after being knocked out by Russians Rubin Kazan where they lost the second leg 2-1.

A 1-1 draw at Trabzonspor was enough for twice former winners Benfica while Twente Enschede, FC Zurich, Sturm Graz and APOEL also went into the final round of the qualifiers following Wednesday's 12 ties.

Dynamo, three times beaten semi-finalists, left former AC Milan and Chelsea striker Andriy Shevchenko on the bench at Rubin as they attempted to claw back from a 2-0 home defeat.

It never looked likely as Vladimir Dyadyun and Alexei Medvedev scored in each half for the Russians before Oleg Gusev replied late on.

Rangers, held 1-1 at home by 1979 runners-up Malmo, had Steven Whittaker sent off in the 19th minute for throwing the ball at an opponent's head but still went in front through Nikica Jelavic five minutes later.

The Scottish champions, 10-times Champions League participants, also had Madjid Bougherra dismissed in the 66th minute before Jelavic missed a golden chance to score another and Malmo had Ricardinho ordered off.

Finally, Jiloan Hamad smashed in a rebound with 10 minutes left to send the Swedes through.

Belgian champions Racing Genk held on for a 1-1 draw away to Partizan Belgrade to knock out the former European Cup finalists 3-2 on aggregate.

Nemanja Tomic put the Serbs ahead five minutes before halftime but Jelle Vossen levelled with a penalty just before the hour. The visitors then survived waves of attacks, teenager Lazar Markovic missing a golden chance for the hosts in the dying minutes.

Benfica, twice champions and five-times runners up, fielded an all-foreign starting line-up including eight South Americans as they took a 2-0 first leg lead to Turkey.

The Portuguese League runners-up extended it with a 19th minute goal by Nolito, signed from Barcelona, who collected Javier Saviola's pass and drifted past two opponents before scoring.

Paulo Henrique equalised before halftime but it was not nearly enough for the hosts.

Argentine defender Luis Ibanez swept home a rebound in stoppage time to give Croatian champions Dinamo Zagreb, who last qualified in 1999/00, a 1-0 win over HJK Helsinki as they qualified 3-1.

Forward Admir Mehmedi missed a first-half penalty but atoned with a second-half goal to give FC Zurich a 1-0 win over Standard Liege in a meeting of two former European Cup semi-finalists, sending the Swiss through 2-1 on aggregate.

Dutch side Twente Enschede comfortably held out for a goalless draw at Romania's Vaslui to qualify 2-0 on aggregate and Austrian champions Sturm Graz beat Georgia's Zestafoni 1-0 for a 2-1 aggregate win.

Roman Kienast scored a second-half winner for Sturm who last qualified in 2000/01.