A farewell to Arda 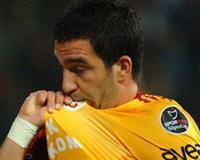 The Galatasaray Club has released a farewell message to team captain Arda Turan after approving the player’s transfer to Atletico Madrid yesterday.

An announcement published on the Galatasaray website entitled 'Farewell Turan' details the 24-year-old national player's career with the club. A statement in the final section of the announcement under the headline, "Thank you Arda Turan" reads; "
''Arda Turan was brought up in the club's youth system; he has donned our uniform for 11 years and at the age of 22 became the team captain. As of August 9th, 2011 Turan has now been transferred to one of Spain's most rooted football clubs Atletico Madrid. We want to thank Arda Turan for all of his efforts and wish him superior success throughout his career."