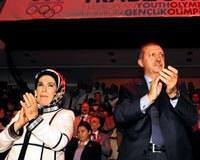 Prime Minister Recep Tayyip Erdoğan will announce today at the Olimpiyatevi (Olympic House) that instead of applying to host the Euro 2020 Football Championship, Turkey will be a candidate for the 2020 Olympics.

Prime Minister Recep Tayyip Erdoğan will be announcing Istanbul's official candidacy to host the 2020 Olympics and Paralympics Games at a press conference held today at 14:00 at Ataköy's Olimpiyatevi.
At the same time, the announcement of candidacy for the 2020 Olympics means that Turkey will not be applying to host the Euro 2020 European Football Championship.
According to customs, when two international organizations are held within the same year, countries vying to host must make a selection between one or the other, thereby allowing for a higher probability of winning the opportunity to act as host.
RIVALING MADRID, ROMA AND DOHA
Speculation is that the decision to compete to host the 2020 Olympic Games versus the Euro 2020 Football Championships may be in part due to the negativity surrounding a series of match—fixing allegations which have rocked Turkish football.
Istanbul's rivals to host the 2020 Olympic Games include Madrid, Rome, Tokyo and Doha.